On January 3, 2017, the North Carolina Department of Transportation (NCDOT) awarded the 2.5‐mile long, $145.3 million NC 12 Rodanthe bridge project, over Pamlico Sound, to the Flatiron Construction Corp. and RK&K design‐build team. The opportunity of designing and constructing this unique Rodanthe Bridge on North Carolina’s scenic coast is a very exciting project and when completed next year it will be the ninth longest bridge in North Carolina! 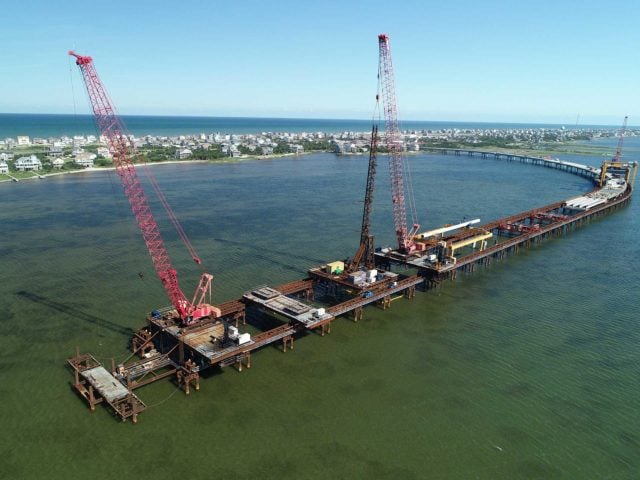 In 2016, the long‐term solution was identified and through a lengthy design‐build pursuit, RK&K was the Lead Designer for this extraordinary coastal bridge project. By utilizing nearly every in‐house engineering discipline, RK&K’s design elevated this portion of NC 12 onto a 2.5‐mile (12,986.79167 feet for structural engineers!) bridge that extends from the southern end of the Pea Island National Wildlife Refuge over Pamlico Sound into Rodanthe. RK&K’s design minimized impacts to the Pea Island National Wildlife Refuge, submerged aquatic vegetation (SAV), and the community of Rodanthe, while maintaining safe and reliable access for area residents and visitors to southern Hatteras Island.

The bridge is comprised of 107 spans and is scheduled to be opened in the fall of 2021.

Construction began in November of 2018 with the assembly of the advancing rail system at the South Heading in the town of Rodanthe. The North Heading within the Pea Island National Wildlife Refuge was started during the month of March 2019. Currently, construction has reached Bent 32 on the South Heading and Bent 94 on the North Heading. The bridge is comprised of 107 spans and is scheduled to be opened in the fall of 2021. 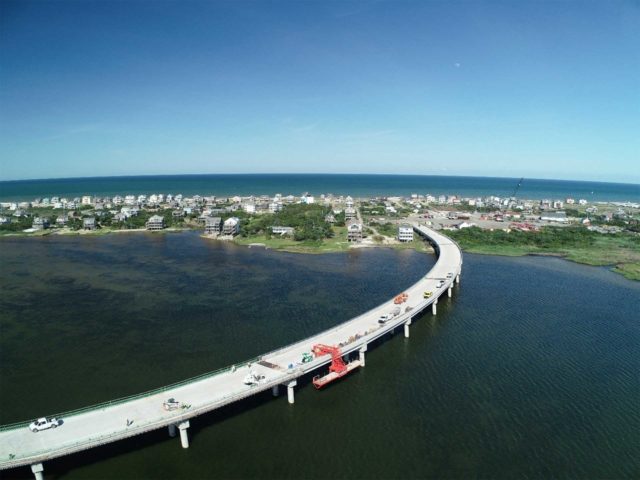 Due to the many environmental constraints, magnitude of the project, aggressive schedule, and public sensitivity; the Flatiron/RK&K team thoroughly evaluated design and construction techniques that would best serve the many challenges and unique aspects of the project. Due to the geometry of the bridge, environmental limitations, and accelerated schedule, our team developed a specific construction technique that would minimize the footprint of impacts to the environment. This method was an innovative “Advancing Rail System” that would allow gantry and platform cranes to straddle the newly constructed bridge, which substantially decreased impacts to the environment. While the new bridge is nearly 13,000 feet long, the rail system will only be 3,000 linear feet at any one time, as it uses previously constructed sections of the bridge for access. 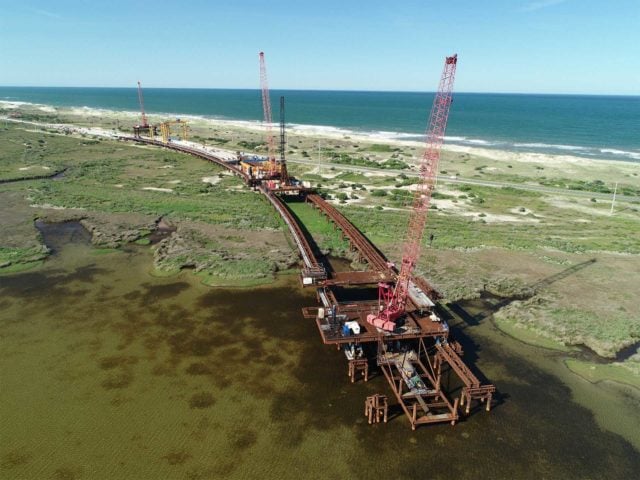 Building the bridge using this innovative “Advancing Rail System” or leap‐frog technique and constructing the structure from both a North and South Heading will accelerate the project schedule and mitigate possible delays. The details of this unique structure are described in the following table:

With a horizontal alignment that narrowly bypasses a historic sunken ship, the new two‐lane bridge is 40‐foot wide with bicycle safe rails and has a minimum of 17 feet of clearance above mean sea level (MSL). The superstructure consists of 72” FIBs in the tangent section of the main bridge and the edge girder system eliminates the need for overhang falsework and allows for more rapid deck construction. The interior bent caps consist of cast-in-place (CIP) concrete delivered to the bridge site with a required concrete strength of 6.5 ksi.

The bridge utilizes 5-inch thick precast deck panels supporting a 5.5-inch CIP deck for the main bridge. Stainless steel rebar is used throughout the cast‐in‐place concrete in the deck to reduce future maintenance cost and extend the life of the bridge. The RFP required a 100-year service life.

This project also includes extremely complex geotechnical design challenges as the team works within Pamlico Sound. The subsurface below the proposed bridge consists of various layers of sand and silt and due to the environmentally sensitive areas, much of the geotechnical activities and drilling at the bridge approaches were done using specialized “marsh buggies” that minimized environmental impacts.

This impressive 2.5‐mile long bridge over Pamlico Sound is the longest bridge ever designed by RK&K.

The bridge utilized precast 54” diameter concrete cylinder piles throughout the length of the main bridge in order to decrease the number of piles required. The total number of 54” diameter piles is 294 with a total length of installed driven pile of approximately 12,000 linear feet. Also, the transition spans utilized 30” square precast prestressed concrete piles. The total length installed was almost 4,000 linear feet. The concrete piles (30” and 54”) were driven between 80 feet to 135 feet deep into the bottom of Pamlico Sound. The depth required for each pile is equal to the height of a typical 15‐story building and the combined total length of piles needed for the entire project is nearly 3 miles.

The preliminary plans provided by the NCDOT called for a T‐intersection with existing NC 12. Focusing on innovation and improvements to the original design, our team proposed a roundabout that will operate at a level of service A in the year 2040 compared to the T‐intersection that would operate at level of service F. The roundabout also provides reduced right‐of‐way costs by avoiding retail property in the area and traffic calming benefits due to lower speeds through the intersection.