In July 2020, after almost 20 years of planning, design, and construction, Delaware Governor John Carney, along with federal, state, and local officials, celebrated the opening of a new bridge spanning the Christina River in Wilmington.

The structure was dedicated to retired Senator Margaret Rose Henry, the first Black woman elected to the Delaware State Senate. 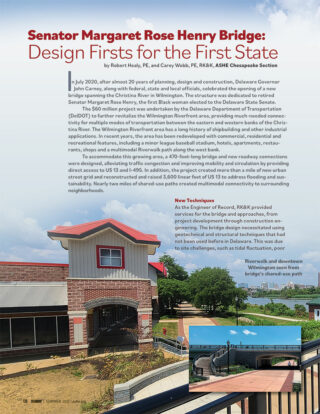 The $60 million project was undertaken by the Delaware Department of Transportation (DelDOT) to further revitalize the Wilmington Riverfront area, providing much-needed connectivity for multiple modes of transportation between the eastern and western banks of the Christina River.

The Wilmington Riverfront area has a long history of shipbuilding and other industrial applications. In recent years, the area has been redeveloped with commercial, residential, and recreational features, including a minor league baseball stadium, hotels, apartments, restaurants, shops, and a multimodal Riverwalk path along the west bank. To accommodate this growing area, a 470-foot-long bridge and new roadway connections were designed, alleviating traffic congestion and improving mobility and circulation by providing direct access to US 13 and I-495. In addition, the project created more than a mile of new urban street grid and reconstructed and raised 3,600 linear feet of US 13 to address flooding and sustainability. Nearly two miles of shared-use paths created multimodal connectivity to surrounding neighborhoods.

As the Engineer of Record, RK&K provided services for the bridge and approaches, from project development through construction engineering.

The bridge design necessitated using geotechnical and structural techniques that had not been used before in Delaware. This was due to site challenges, such as tidal fluctuation, poor subgrade soils, a skewed alignment, and the proximity of adjacent buildings. The team also needed to meet the project goals of a low-profile bridge, maintenance of river navigation and incorporation of sea-level rise.

Due to the presence of soft and highly plastic fine-grained soils at the proposed abutment and approach retaining walls, using conventional Mechanically Stabilized Earth (MSE) structures would have resulted in excessive settlements. The geotechnical design challenges included global stability, long-term settlement, and downdrag on the bridge foundations. A variety of geotechnical and structural options were studied, resulting in the selection of the following treatments:

This project proved that it was possible to have an efficient geotechnical design using different treatment methods, optimizing each segment to play its proper role in the structure.

The Christina River is considered navigable in this area of Wilmington. U.S. Coast Guard navigational clearance requirements dictated a 150-foot-wide main channel and a minimum 14-foot under clearance, including projected sea level rise. Along the 65-degree bridge skew, a main span of 180 feet became necessary to provide these clearances. The Christina River, which is close to the Delaware River and Delaware Bay, experiences a five-foot tidal swing, presenting another construction challenge. There was a strong desire to set the bridge and roadway profile low to keep the bridge as unobtrusive as possible while simplifying the multimodal connections to the bridge and preserving skyline views of downtown Wilmington from the Riverwalk.

These goals were accomplished by employing a precast concrete spliced girder bridge design, the first-ever use of this technique by DelDOT. The 45-foot-wide superstructure consisted of three spans carrying two travel lanes and a separated 14-foot shared-use path. Concrete abutments and piers were founded on driven 24-inch and 30-inch square prestressed concrete piles. Five lines of prestressed, post-tensioned concrete girders were haunched in a straight taper to a depth of seven feet at each pier.

The bridge’s appearance was important to DelDOT, the City of Wilmington, the local redevelopment organization. and the public. The geometry of the bridge (low profile, convenient access, enhanced views) was critical in the bridge’s siting and design. As the design evolved, other elements were added. Bridge piers were shaped and contoured, and abutments and retaining walls were developed in tandem to match appearance. Concrete surfaces on the piers, abutments and walls received stone form liner treatments and were stained for subtle effect. The multimodal underpass walls and prominent stairway were treated to coordinate with the bridge detailing. The open pedestrian underpass, which is 50 feet long and 30 feet wide, was designed with an arching roof, full safety lighting, and panels for displaying artwork. Energy-efficient LED lighting was included both on and under the bridge to further enhance the bridge’s appearance.

The bridge and network of new approach roadways and multiuse paths encourage economic development, further enhancing the quality of life, livability, and sustainability of southern Wilmington’s neighborhoods. Studies and initiatives have focused on redeveloping these communities and improving mobility and system linkage to the developing Riverfront. The new bridge, roadway and path connections supported those initiatives by providing multimodal access between the attractions, jobs, and retail establishments lining both sides of the Riverfront.