With summer and vacation season in full-swing, I recently had the chance to drive over the intracoastal water on the Surf City Bridge in North Carolina and saw first-hand how much this project connected and improved the community in such a short amount of time. I witnessed families on their way to a much-needed beach getaway, taking in views and admiring the water below them rather than being stuck in a vehicular standstill. Children in the backseat were smiling excitedly and pointing out the window instead of bored at a traffic back-up asking, “are we there yet?”

​Looking back on the second anniversary of this completed project made me realize how much the Surf City bridge project affirmed many of my own and RK&K’s core tenants, such as the importance of communication, coordination with clients and partners, and working for and with the community. 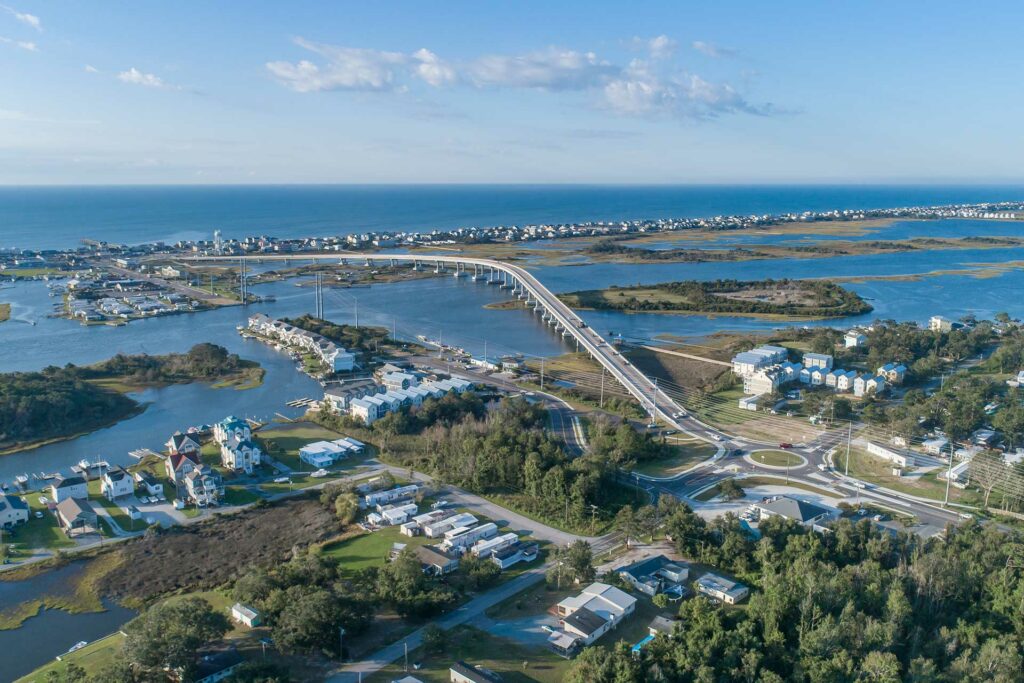 An aerial view of the Surf City Bridge looking south.

Let’s begin with some background. This project was highlighted by a 3,773-foot-long fixed-span bridge providing much-needed 65-foot clearance above the Atlantic Intracoastal Waterway in Surf City, NC. The bridge connects to Topsail Island, a popular tourist destination, to the mainland. At either end of the bridge is a 130-foot-diameter roundabout to aid with traffic flow.

The new bridge replaced a steel truss swing span bridge that was a symbol to the community. People knew you were at the beach when you heard the whirr of your tires crossing over the bridge. However, built in 1955, the old bridge had become structurally deficient, needing continuous maintenance and breaking down often. Due to the 13-foot clearance above the Intracoastal Waterway, it had to be continuously manned by tenders for the routine openings to allow boats to pass, which caused major traffic back-ups during the busy season.

An aerial view of the Surf City Bridge looking northwest.

It has been said that the new bridge we built represents progress, which is true. However, it also represents, as I witnessed on the bridge that day: better connectivity, safer travels, happier residents and tourists, and a new landmark for the community of Surf City.

As assistant resident engineer for this project, I was responsible for day-to-day construction management and contract administration along with answering questions from the contractors and ensuring inspectors were scheduled as needed for major operations. I closely tracked utilities, coordinated with stakeholders, ensured permit compliance, thoroughly tracked submittals, RFIs, and change orders, and stayed ahead of claims to mitigate potential issues as quickly as possible. It was a lot of moving parts, and I took my role seriously to provide overall coordination and make sure the project moved forward successfully and on-time. Additionally, we pledged to deliver the project ahead of schedule. Turns out, we managed to complete it almost an entire year ahead of schedule!

Accomplishing this feat required keeping everything and everyone updated and organized during every step of the project.

Accomplishing this feat required keeping everything and everyone updated and organized during every step of the project. The team took advantage of the technology we already had– the various apps of Microsoft Office. We utilized technological elements, such as Excel spreadsheets, for an electronic-based tracking process. Documentation and organization were key to keeping all information updated and ready to share with contractors, the inspection team, and anybody else who needed to be kept in the loop with who was working on what at any point. 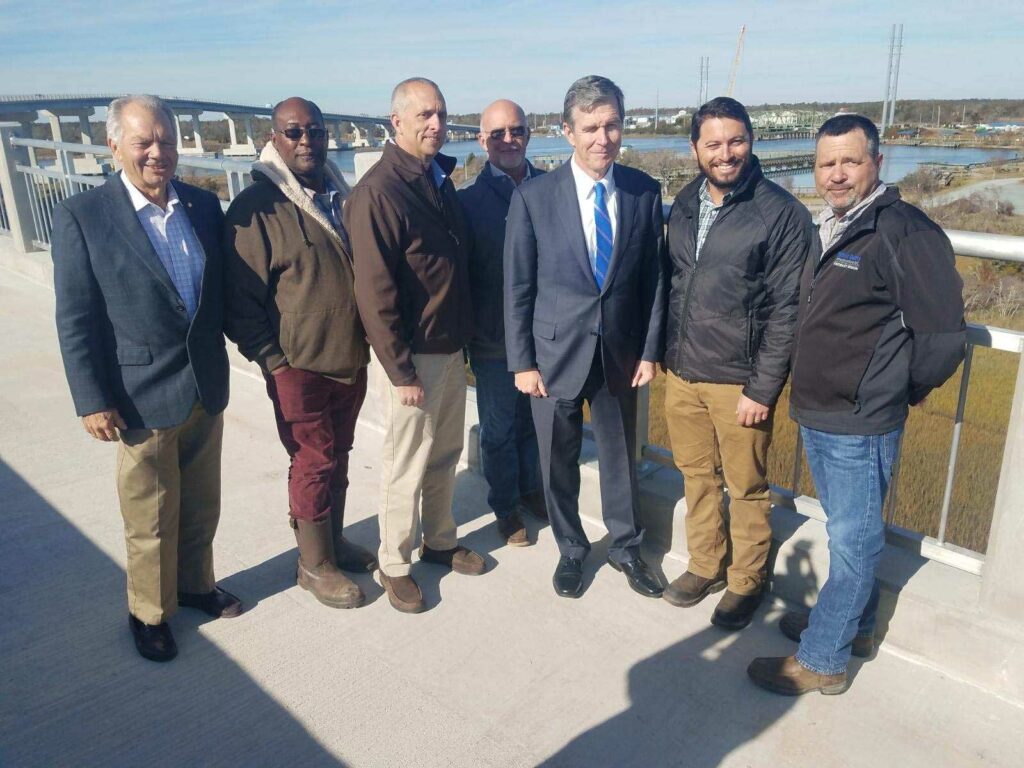 A few of the team members for the Surf City Bridge project.

SharePoint and electronic tracking made work more accessible, collaborative, and time efficient. Everyone could access the documents as needed. Teamwork between all parties was very important throughout construction since so many people were working on different aspects at any given time. This experience and the lessons learned allowed for an easier transition when the COVID-19 pandemic forced all communications and tracking virtual last year. We were already ahead of the curve!

Another lesson learned is something that is just as true in relationships as it is when building bridges: communication is key. The Surf City project was successful because of mutual respect strengthened with frequent communication between the contractor, client, inspection staff, engineers, and all other stakeholders. Developing a great working relationship with everyone made sure that we worked as a team to a keep the goal of completing the project ahead of schedule. For example, I could, day or night, send someone an email or pick up the phone to quickly get a response to any issues that arose. This kept the project moving and helped us adjust our plans and overcome challenges quickly and efficiently, allowing us to reach our accelerated deadline.

Through every phase of planning and construction we kept the community involved with what was happening with the bridge.

The importance of communication also extended to the community and with our commitment to improving the areas where we work. Through every phase of planning and construction we kept the community involved with what was happening with the bridge. I spoke with many residents and business owners, coordinating and communicating with them to ensure the final project met their needs because, ultimately, all this work was for them. I took pride in addressing their questions and knowing that our team’s work would help grow and improve the place they call “home.”

A photo of the author on Surf City Bridge.

As I celebrate two years of the new and improved Surf City bridge, I realize how fortunate I am to be an integral part of such an important project that is positively impacting the area where I live, work, and play.

I am confident the lessons learned from working on the Surf City Bridge Project will further RK&K’s commitment to communication and collaboration to continue improving transportation infrastructure throughout Southeastern North Carolina.