Whenever someone asks me about my job, I love sharing all of the cool things I’ve seen through the years. It really is true – every project is different, each presenting its own opportunities and challenges. And what I really love is solving the challenges. Here at RK&K, I’ve learned sometimes the solutions are quite different than you might expect. I recently experienced this first-hand as part of a project that used cutting-edge techniques to lessen impacts to traffic. With a push in a different direction – a rather heavy one – the project team improved public safety and reduced obstructions.

In March 2021, our team successfully implemented this innovative solution on the Brightline Trains project, a $4-billion high-speed rail program running between the Orlando International Airport and Cocoa, FL. For this project, we are representing the interest of Florida’s Turnpike Enterprise by monitoring the maintenance of traffic and verifying that all roadway improvements are built per the FDOT Specifications.

By building the new rail tunnel under an active highway, we were able to keep traffic moving.

Typically, our team would have cut the road open, built the box culvert, and then rebuilt the road on top of the culvert. Construction would have lasted months and greatly hindered the traveling public. Instead, by using a new trenchless construction technique known as “box-jacking,” there were only two weeks of traffic impacts, reducing the road to one lane in each direction. By building the new rail tunnel under an active highway, we were able to keep traffic moving.

Here is why this was so unique and how we made it happen.

First, box-jacking is a technique not many people have seen or even heard of – in fact, this project is one of the first times it has been used in the United States. The process began by building the three different pre-cast concrete box segments measuring 50-feet-wide and 30-feet-tall on the side of the roadway. The first of these segments was built with a huge concrete thrust block that the jacks pushed against. Hydraulic jacks were installed to push the segments, as two excavators inside the box and one on top removed the embankment material as the box was pushed forward. Cutting edges were also placed on the front of the box to help cut through the roadway embankment. 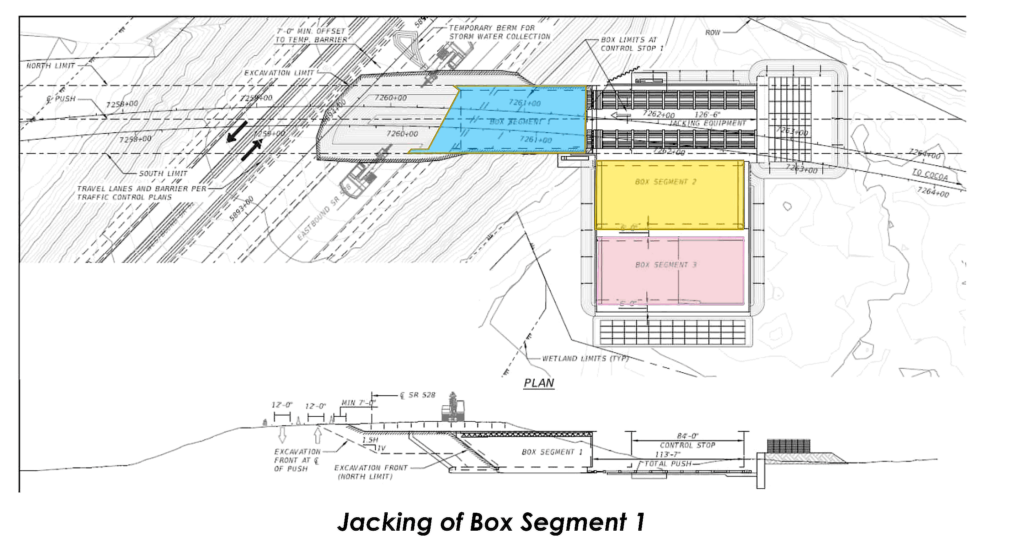 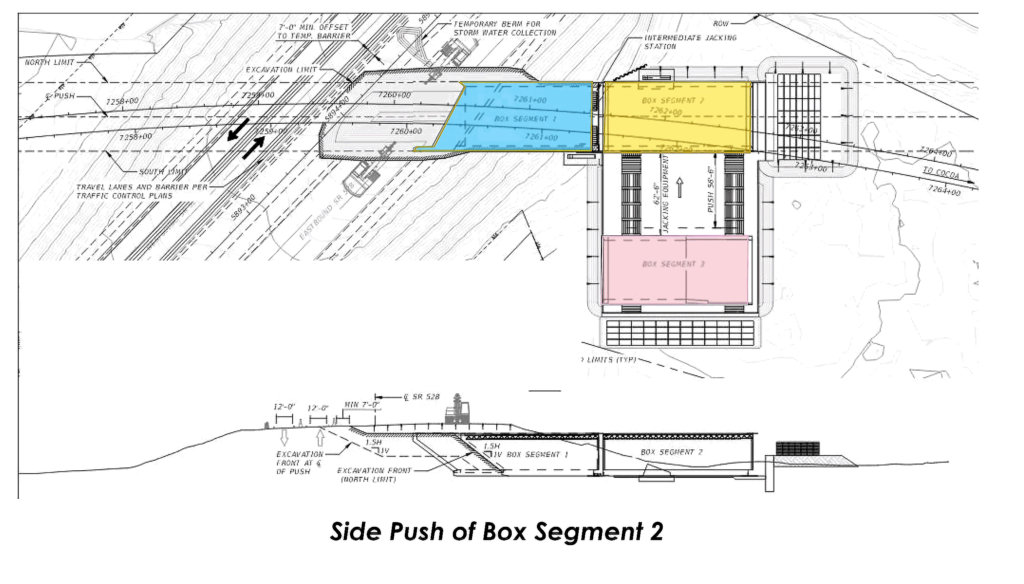 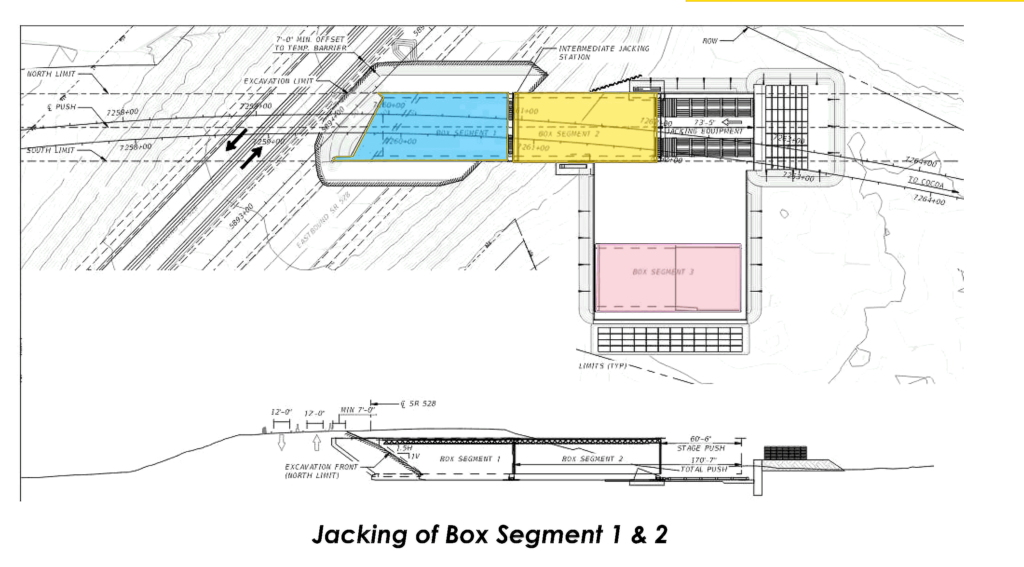 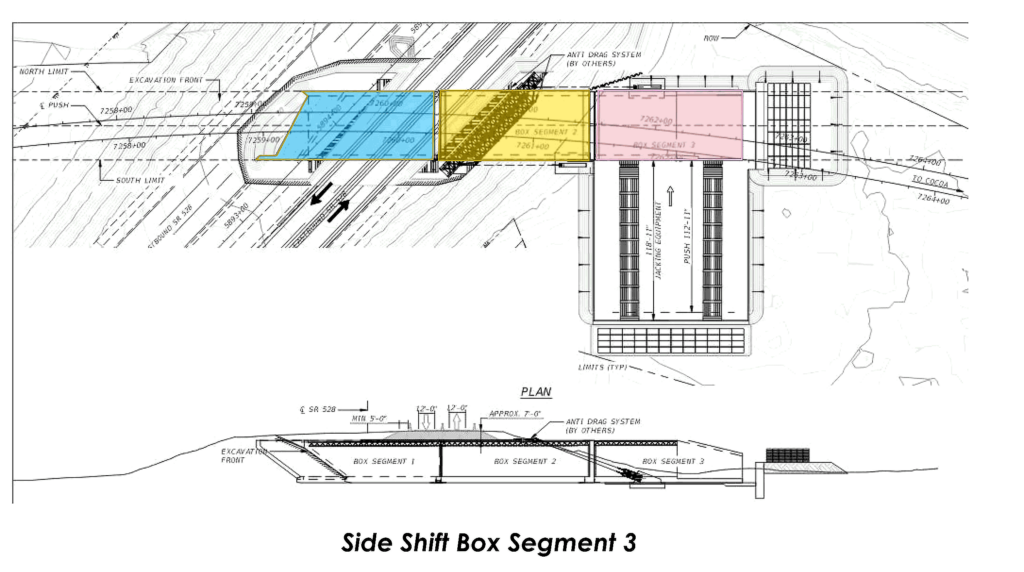 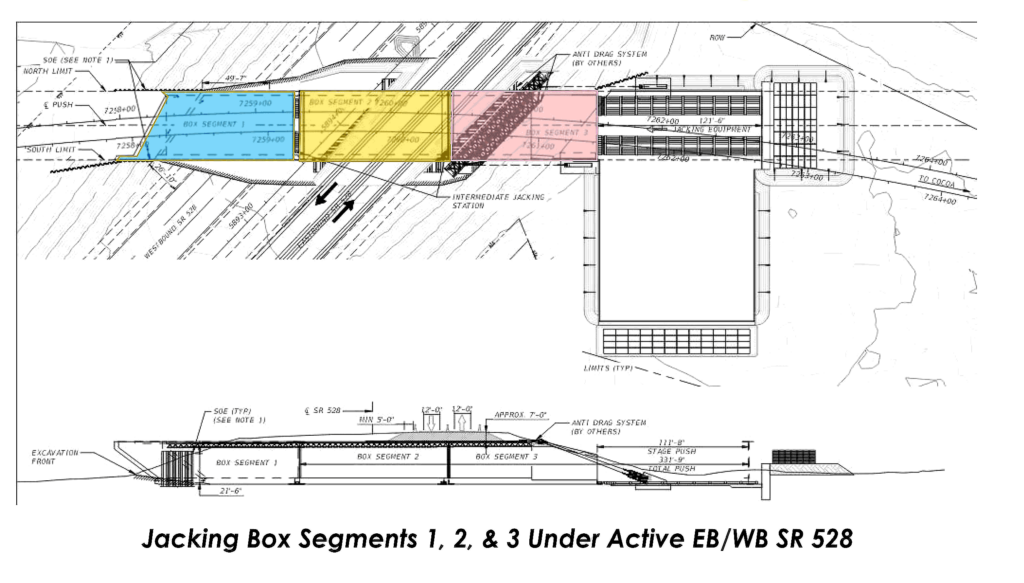 When the first box was pushed forward at a speed of approximately one to three feet per hour, the second segment was moved up with the jacks and aligned with the first. The third segment followed the same process until all the boxes were moved and aligned with each other. I often describe it as working a lot like a slide puzzle, and all this was happening while live traffic was continuing up above!

With the boxes in place, the newly created rail underpass could then house two train tracks, eliminating the need for an at-grade rail crossing.

While the uniqueness and ultimate success of this project was exciting, it also presented several challenges our team had to overcome since the technique was completely new to RK&K as a firm. But we never shy away from a challenge.

Box-jacking was an alternative technical concept the contractor brought to the table later in the project’s initial plan development. FDOT was very involved in the review and saw how box-jacking was a more efficient way to build the project than the original plans depicted and gave Brightline the go-ahead to further evaluate the method. The team quickly adjusted plans to move forward with the box-jack. We adapted quickly and verified the new traffic control plans were safe and efficient for the traveling public through regular field reviews. The excellent inspection staff was instrumental to this as well, acting as our constant in the field and keeping all parties informed throughout the project.

The idea was to build the roadway on top of this anti-drag system so when the box was pushed underneath, the roadway didn’t shift, like when you pull a tablecloth out from underneath dishes (just not that fast!).

Brightline completed one other similar box-push on this rail corridor for a box culvert. This was on portion of the project maintained by the Central Florida Expressway Authority. This box was pushed through an open-cut section of the roadway. For this location, they were able to completely close the road, remove all material, push the box, then rebuild the roadway on top of the box. Our team witnessed this construction and came away with several lessons learned that greatly helped us work through this new technique.

As with many projects, our success also depended on planning and preparation and we attended many meetings to go through the process. We routinely – and in detail – discussed maintenance of traffic shifts, which had multiple detour and back-up plans prepared. There were several contingencies in the planning since multiple layers of fail safes were needed to perform a new construction method successfully and safely under a major freeway. For example, we had to plan for a situation if the boxes did not move as expected under the pavement. An anti-drag system made of grease and plates was installed and held in place by anchors cast into the ground. The idea was to build the roadway on top of this anti-drag system so when the box was pushed underneath, the roadway didn’t shift, like when you pull a tablecloth out from underneath dishes (just not that fast!). While pushing under the pavement, the metal plates between boxes got so hot that they welded to each other. This didn’t allow the free movement, affecting the box alignment and thus cause some pavement to buckle, creating a dip on top of the box. The team had to stop, mill, and resurface so that the roadway was smooth before we continued with the box-push. 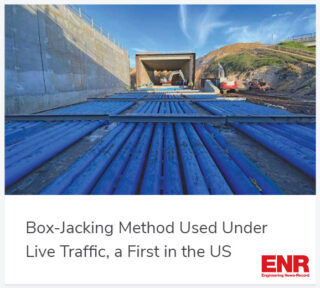 Using the box-jacking method for this project was so pioneering, Engineering News-Record covered its progress in a recent article. This was the first implementation in the country under a live highway!

Despite the obstacles along the way, I was proud to be part of this project, and witnessing the box-jacking method in action was thrilling. As RK&K moves forward with this project and we work on other projects across the country, I know we will continue to search for and use creative solutions like these that benefits the project’s timeline and the communities we serve.