Read More: What Green Can Mean for Gwinnett County, GA

For every project we work on, RK&K considers and works out unique solutions aimed at positively impacting the environment without negatively impacting the residents that live there. Sometimes these ideas may seem too out-of-the-box or complicated at first, but we’ve seen firsthand that the risk is worth the reward. For example, we recently learned that even in the most bustling urban areas, successful, major green infrastructure is possible! 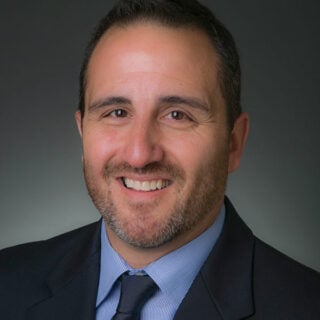 We recently sat down with construction manager Patrick DiNicola to discuss his experiences providing large-scale construction management and construction inspection services for green infrastructure installations for DC Water’s innovative Clean Rivers Project and how the lessons learned will pave the way for RK&K’s work on future projects.

Thanks for taking the time to speak with us, Patrick. Can you tell us about the DC Water project?

Sure! One of our clients, DC Water, was required under a consent decree to reduce the amount of sewerage overflows discharging into the Potomac, Anacostia, and Rock Creek watersheds. In the District, the sewers are combined, so when it rains, stormwater mixes with sewer water and can overflow untreated into nearby waterways. This can create a lot of problems.

To solve this, DC Water developed a long-term program to address these overflows called the Clean Rivers Program, which includes several billion dollars’ worth of design, construction, and maintenance/operation. In addition to capturing this runoff through the construction of very large underground tunnels, which allows the wastewater plant to slowly treat the combined sewer runoff, DC Water wanted to include green infrastructure (GI) as an alternative method. Using GI helps capture and slow down stormwater and is an additional way to reduce combined sewer overflow into area rivers.

That sounds like a big task. Where did you start and what kind of GI was used?

The first of these projects was constructed in the Rock Creek and Potomac sewersheds in the Brightwood/Manor Park and Glover Park/Burleith neighborhoods. More than 100 facilities were constructed to capture stormwater runoff. The goal was to collect and store stormwater runoff in these facilities before being released slowly back into the combined sewer system to help prevent capacity issues and system overflows.

What was so special about this project and the work we did for it?

To start, this was one of the largest instances of GI installation within a metropolitan area! It was in a highly urbanized region, and we worked within the existing right-of-way in the District, so safety and public outreach were of utmost importance. And, while this was an environmental project, it was also an infrastructure project; there were a lot of traditional materials used – concrete, asphalt, rock – but the permeable materials, such as bricks and asphalt, and bioretention soil were key to making it green. 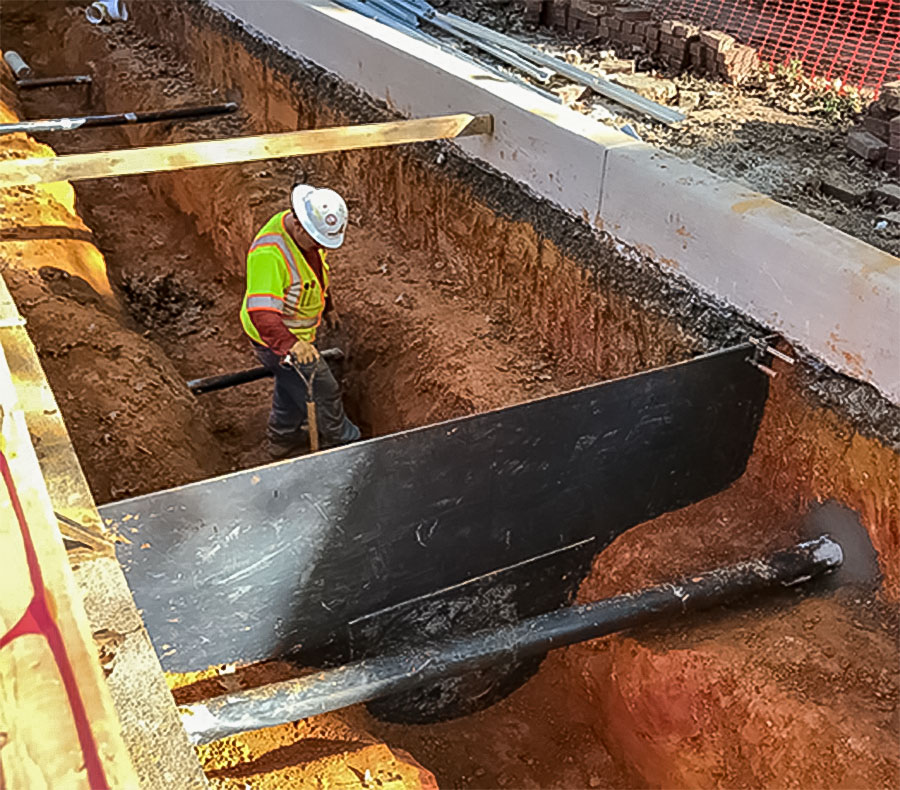 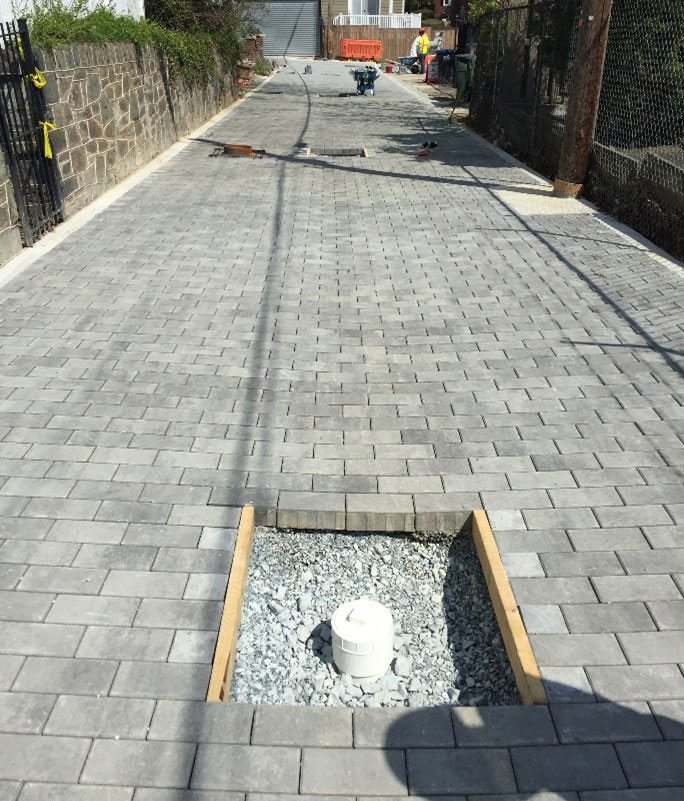 Cut bricks at observation well and concrete collar to be poured for Green Infrastructure Installations in Washington, DC. 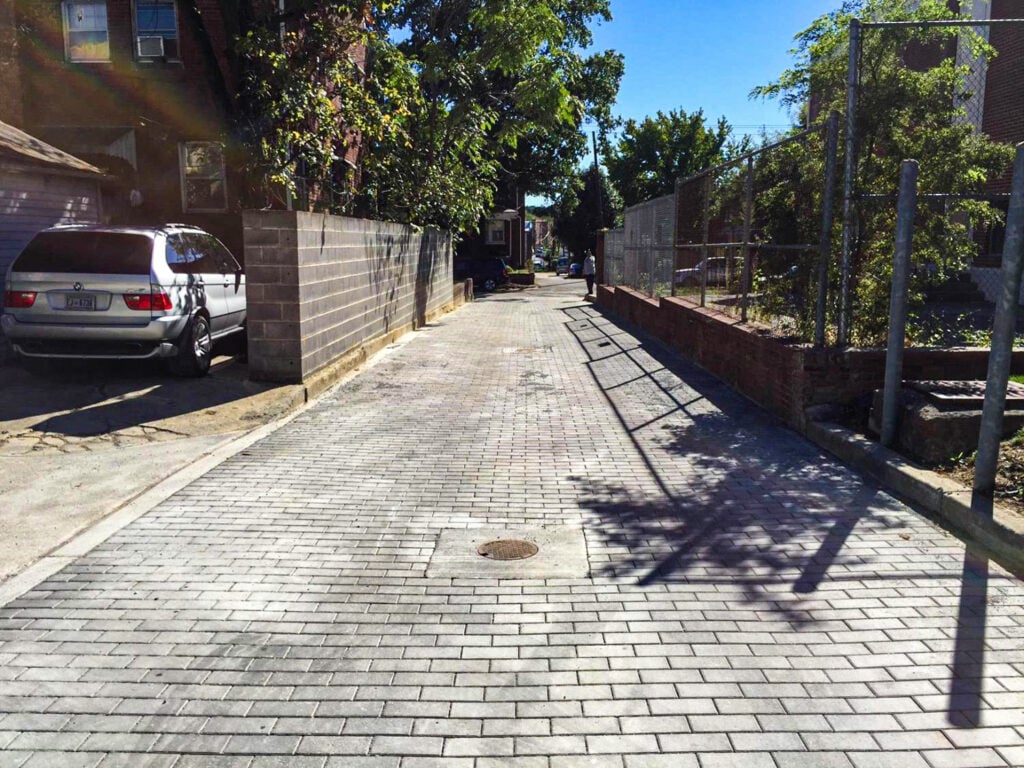 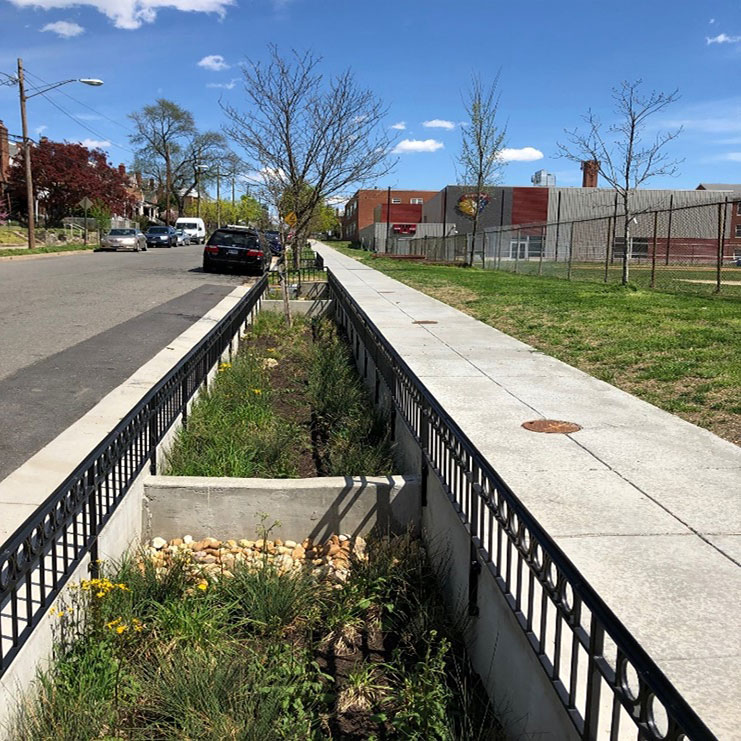 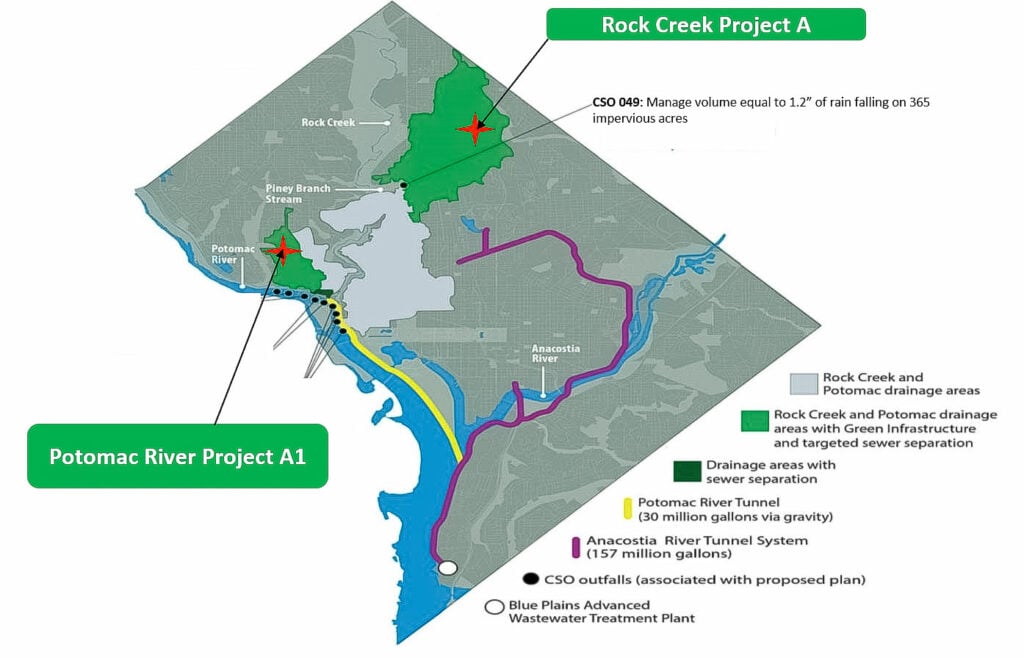 The project was funded via green bonds or EIBs (environmental impact bonds), which provided the upfront capital needed to construct the first GI project. This was a unique solution, the first of its kind actually, and it meant that the work was financed through private investment via these bonds, which were ultimately results-oriented. This means if the green infrastructure was successful, then DC Water would pay a greater return on the bond.

The GI was modeled before construction and then monitored after construction to determine the percentage of flow reduction, which then was applied to the bond agreement for payment. This type of financing was chosen to ensure responsible stewardship of ratepayer funds by transferring a portion of performance risk associated with technologies that had never been implemented on a large scale in the District and create a model funding mechanism other municipalities can leverage to advance the use of green infrastructure across the country.

Another objective was improving transparency to local ratepayers by formally predicting, measuring, and publicly reporting the environmental impact of the green infrastructure.

With so much going on, did the team come across any challenges?

For the first contract, 77 different sites were constructed in a roughly 12-block area of northwest DC. At the height of construction, 12 individual crews were working on the project. We were providing quality assurance oversight with two to three inspectors, so there was a lot of work and ground to cover and a lot of documentation and inspection to do.

How did the team handle this?

Three things helped us overcome the challenges on this large-scale project.

First, we had a check-in meeting with the contractor every Monday and Friday where we would go over the schedule, identify any changes, and review the three-week lookahead. This allowed us to plan appropriately.

Second, we assigned the same inspector to each crew and they started each new facility, so there was familiarity between the construction manager and contractor.

Third, we set up witness hold points during key construction sequences, for example immediately before placing bioretention soil. The contractor knew this was a hold/stop point and we could come out and document the important aspects of the work and make sure that it was meeting the contract requirements.

Collaboration goes a long way. What was it like collaborating with the community on this project?

By working so closely to residents’ front and back yards, I gained a lot of appreciation for and learned many lessons about public outreach, which was critical for this type of project. Our work caused disturbances to people’s daily lives beyond the usual maintenance of traffic/detour conflicts. Construction impacted their parking and their garbage/recycling pick-up, so it was important to provide advanced notification of all scheduled work.

We assisted public outreach extensively by scheduling the work, providing construction updates, and canvassing the neighborhoods with door notices prior to starting work. I also learned that green infrastructure is a great approach for providing stormwater management in a highly urbanized area. It has the benefit of creating additional green space. I also learned how important maintenance is to green infrastructure. You must maintain these facilities regularly so they function as designed for the long term!

RK&K was required to use local contractors on our team. We had a diverse construction management team, which coalesced perfectly and formed the foundation and relationship for future partnering opportunities. Second, the contractor was required to hire local graduates from the National Green Infrastructure Certification Program (NGICP). So, the project not only had a positive impact on the environment, but also the community at large.

Are there any lessons learned from this project you can use in your future work?

There were several engineering and management lessons we applied to the second and subsequent contracts. We learned that these types of GI faculties can be built using standard details. To bring it back to collaboration, this method can save on the up-front design work if there is good communication and partnership with the owner, designer, and during the construction process. Our experience on this contract has led to RK&K’s DC Office assisting the District Department of Transportation in organizing and drafting maintenance plans for their GI assets within the District.

In addition, there is a large need for building green infrastructure to mitigate many types of environmental issues, including stormwater management, heat island effect, and climate change. In urban areas like Washington, DC, you are not able to build traditional stormwater management wetlands and detention ponds. This experience gave us a lot of insight on constructing and designing these facilities, which we can use on future tasks for DC Water and other clients.

Now that the project is completed, was the team able to achieve what they set out to do?

Definitely, even though it was a challenging project that had a lot of construction packed into a relatively short duration. With most projects, you have a sense of ownership and want these facilities to succeed in meeting the project goals. Based on the follow-up monitoring conducted by DC Water, they have performed as expected, so that’s wonderful news. DC Water is planning additional GI contracts to meet their requirements and we are excited for the opportunity to work with them again.