On an exciting day a few weeks ago, the RK&K team was recognized at the 2021 Maryland Quality Initiative virtual conference with the Innovation Award for our work on the MD 213 bridge. Truly an honor. When technical challenges come into play, such as not closing a town’s vital roadway for months and working with significant geometric constraints, you need to get creative. This is how a bridge replacement project with the Maryland Department of Transportation State Highway Administration (MDOT SHA) turned into the first time a lateral slide was performed in Maryland.

It was clear from the beginning there were complexities with the existing structure.

It all started in June 2015 when Maryland Governor Larry Hogan declared the state would rehabilitate or replace all 69 state-owned structurally deficient bridges. On that list was a bridge on MD 213 on the south side of Centreville, a town on the east side of the Chesapeake Bay Bridge. Due to various obstacles that prevented the bridge from being replaced in place, MDOT SHA sought a – you guessed it – innovative solution using Accelerated Bridge Construction (ABC) techniques and brought RK&K on board for structural and geotechnical design services.

It was clear from the beginning there were complexities with the existing structure. The bridge was a two-cell box culvert that carried MD 213 over Old Mill Stream Branch. It was built in 1912 then widened on both sides in 1945 with a concrete slab on timber piles. The structure was approximately 32 feet long and 51 feet wide out-to-out with each side having a 3-foot-wide sidewalk. After many years of use and exposure to the environment, however, the timber piles and top slab experienced significant deterioration. The structure had to be replaced. 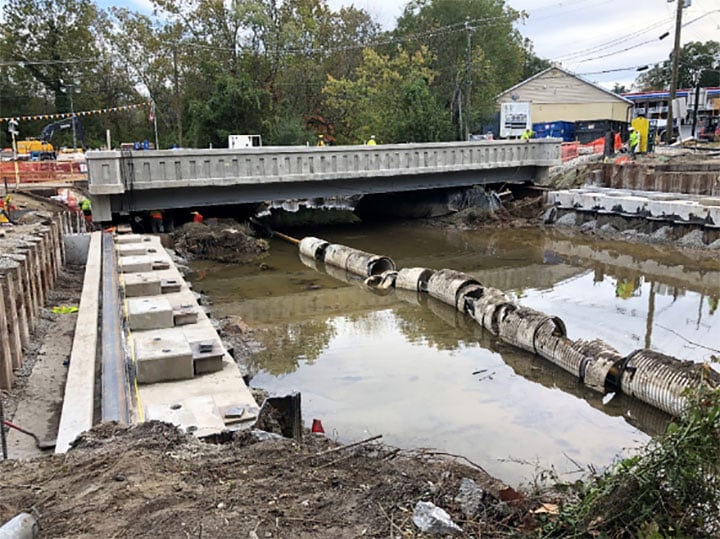 The MD 213 Bridge over Old Mill Stream Branch during construction.

The replacement structure we designed was a 74-foot, 2-inch-long galvanized steel girder bridge with semi-integral abutments. There was a wider sidewalk on one side, and the barriers incorporated architectural treatments and lighting that mimicked the existing bridge to keep everything familiar and aesthetically pleasing. Additionally, the replacement bridge greatly increased the hydraulic opening below the structure, which significantly reduced the possibility of flooding in the future.

The solution: construct the superstructure off alignment and then laterally slide it into place over one long weekend closure of MD 213.

The way a bridge is replaced is often guided by the necessary maintenance of traffic. The three main options, generally, are to keep traffic on the existing bridge and replace the bridge along a different alignment, to push traffic to one side and replace the bridge in phases, and to detour traffic elsewhere and close the bridge so the crew could perform the replacement in place. Given geometric constraints—the bridge is in a vertical and horizontal curve—a new roadway alignment was not feasible. Complicating things further, the nature of the mixed structure types of the widened bridge meant that a phased demolition could make the remaining structure unstable. Working from traditional replacement options, the only other choice would be to close the road during construction. However, MD 213 provides a vital link for Centreville residents to US 50, and the detour length is seven miles. This wouldn’t work either. The solution: construct the superstructure off alignment and then laterally slide it into place over one long weekend closure of MD 213.

The MD 213 bridge replacement was not the first time RK&K partnered with MDOT SHA on an ABC project. In 2012, our team designed the replacement of the bridges carrying West Nursery Road over MD 295 near BWI Thurgood Marshall Airport. For that project, two single-span bridges were fully constructed on temporary supports in the median of MD 295. Once complete, in one weekend closure apiece, the existing bridges were lifted and rolled out of the way with self-propelled modular transports (SPMTs). Then the new spans were put onto SPMTs and rolled into place.

For this project, however, the ABC technique of lateral slide made the most sense. In a lateral slide, the superstructure is fully constructed on temporary supports in line with and immediately adjacent to the supports of the final structure. Once the obstructions are removed, the structure is pushed or pulled into place using rollers or lubricated elastomeric pads. Given the significant open space to the east of existing bridge, there was plenty of room for the contractor to do this. RK&K staff detailed a stiff concrete end diaphragm to distribute the move forces, giving the contractor something to push/pull against.

The bridge was pushed into place using two hydraulic cylinders that applied the approximately 45,000 pounds of force necessary to move the bridge.

Although the proposed bridge superstructure could be built without constraints in an area to the side, the abutments had to be built in their permanent locations, which were roughly 20 feet beyond the existing structure. We suggested the proposed abutments be built in trenches cut through MD 213 and supported by sheet piles. During temporary, off-peak flagging operations, the large timber mats with steel plating protecting the hole could be removed. At the end of the work shift, they would be replaced and full traffic could be restored. 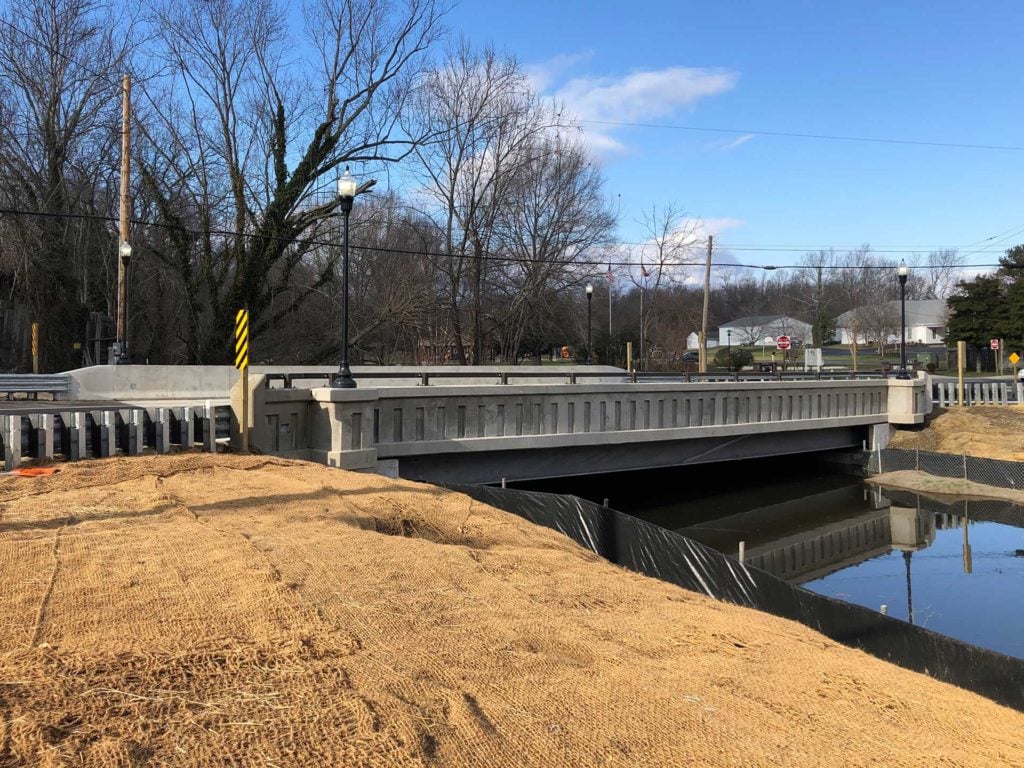 Once the permanent superstructure and abutments were completed apart, the superstructure was slid into place over a long weekend in October 2019. Beginning on a Thursday evening, the contractor demolished the existing structure and regraded the site for the longer bridge. The next step was to vertically jack the superstructure, which weighed approximately 850,000 pounds, and place it on fourteen 100-ton rollers, seven per end. The bridge was pushed into place using two hydraulic cylinders that applied the approximately 45,000 pounds of force necessary to move the bridge. After the slide was complete, the contractor built up and paved the approach roadways, added a temporary barrier, and opened the bridge to traffic on Monday.

Through teamwork, a close relationship with the client, and a track record of ABC knowledge, we were able to successfully replace the deteriorated bridge with a new structure, all while minimizing negative impacts to the public. It just goes to show when traditional methods are not possible, making the slide out of that “box” can lead to amazing results.