Electric vehicles (EVs) are gaining popularity, and demand for this zero-emission technology has steadily increased as it continues to dominate headlines and pique people’s interest. According to a review of this year’s Virginia General Assembly by the Thomas Jefferson Institute (TJI) for Public Policy, the General Assembly is pushing for funding robust rebates on new EV purchases. The TJI article references that the Transportation and Climate Initiative is pushing for $20 million in 2022 and $75 million by 2026 in rebate funds.

If there are a lot of EVs on the road, there will need to be a lot of EV charging stations built to support them.

What many of us in the technology and transportation industry wrestle with, however, is how to support this new technology. Also, referenced in an article by Virginia Auto Dealers Association, President Don Hall stated, “We also need infrastructure. In California, for example, there are more than 7,000 charging stations with more than 30,000 outlets for EVs to plug in. Virginia has only 711 station with 2,150 outlets. Virginia should be committing no less than $720 million over the next five years to prepare and grow with market demand. These funds need to be appropriated by the Commonwealth and must happen in advance of any mandates becoming effective.”

If there are a lot of EVs on the road, there will need to be a lot of EV charging stations built to support them. So, how can we make new EV charging systems available, accessible, and convenient? 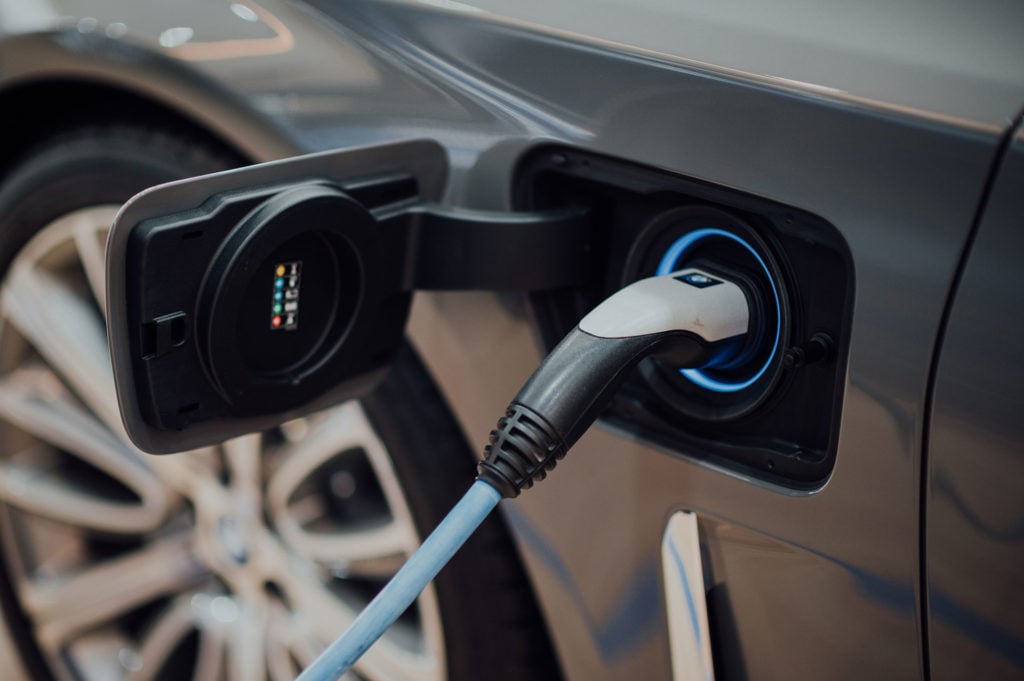 A typical EV charging port on an electric vehicle. (Credit: Chuttersnap on UnSplash)

RK&K had to answer that question when we were tasked with installing plugless charging stations for electric vehicles along a city street in Richmond, Virginia. Through this process, we uncovered solutions to problems that arose during this deployment and learned a lot about this growing technology and how it can fit best into a city’s existing infrastructure.

The story begins when our team was contracted by HandCraft Cleaners which was renovating its central dry-cleaning operations building and fleet parking lot for a new office/light manufacturing space. The 88,000-square-foot operations building with nearly 300 parking spaces was on a block and a half of real estate in a restoration “hot” warehouse district that was being developed with businesses such as breweries, grocery stores, and Plugless Power EV Technologies.

The project objective was to redevelop truck docks and storage lots to tenant/employee parking, which was also open as patios for beer tasting events and food service for prepared meals. It was quite a challenge to fit the malt and hops silos with the grain spoils digester and chillers while also providing space for truck deliveries to support the brewery. What became a greater challenge, however, was outfitting the existing, on-street public parking for Plugless Power’s magnetic induction units. 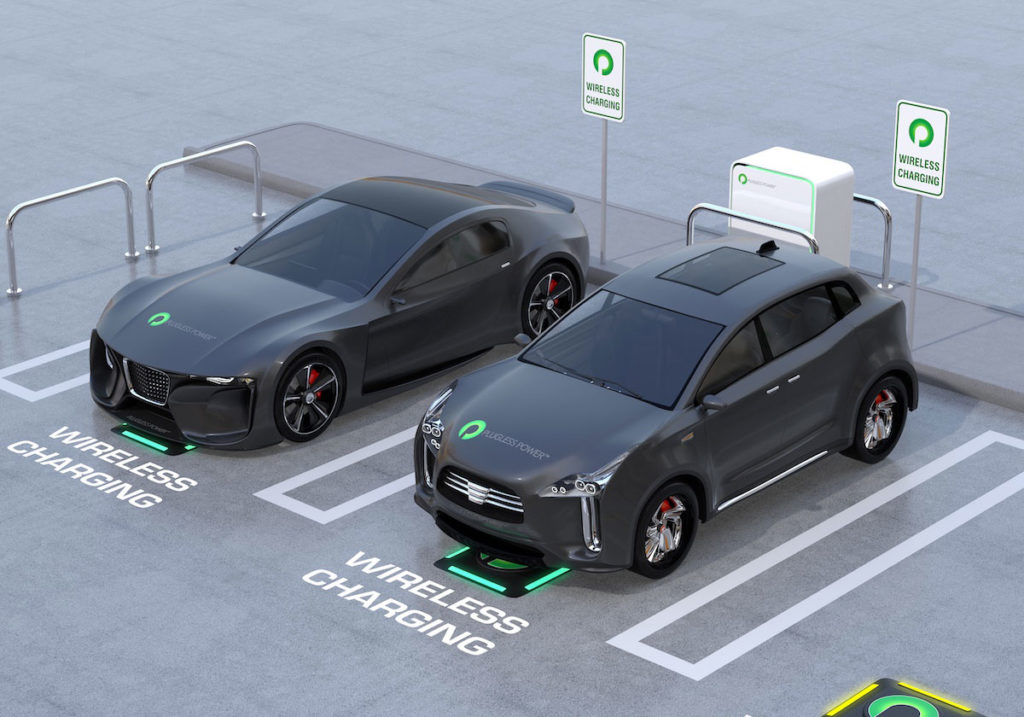 You can be old-school and buy an EV and set up the home charging unit in your garage or driveway. But many people are living in higher density apartment dwellings with standard parking stall lots or decks. Residents in these urban centers rely on parallel, on-street public parking that may be more than a block away from their building. Looking at the site, we decided a plugless EV charge station was the right way to go for the retro warehouse building. To make it work, we had to efficiently accommodate the specs and protection for the parking space under/around the EV pad in the public right-of-way, which was not a welcomed encroachment. Something like this had never been put in the street before.

The metered control station would be like a parking meter where you pay the parking fee through an app on your phone.

Initially, Plugless wanted parallel parking outside its building space with bollards in the street to protect the magnetic pad and dedicated charging stall. The metered control station would be like a parking meter where you pay the parking fee through an app on your phone. The normal cross-slope of the parking space, however, would need to be leveled by half, causing inherently poor drainage issues that would get worse as the gutter capacity/curb reveal is further reduced or eliminated. 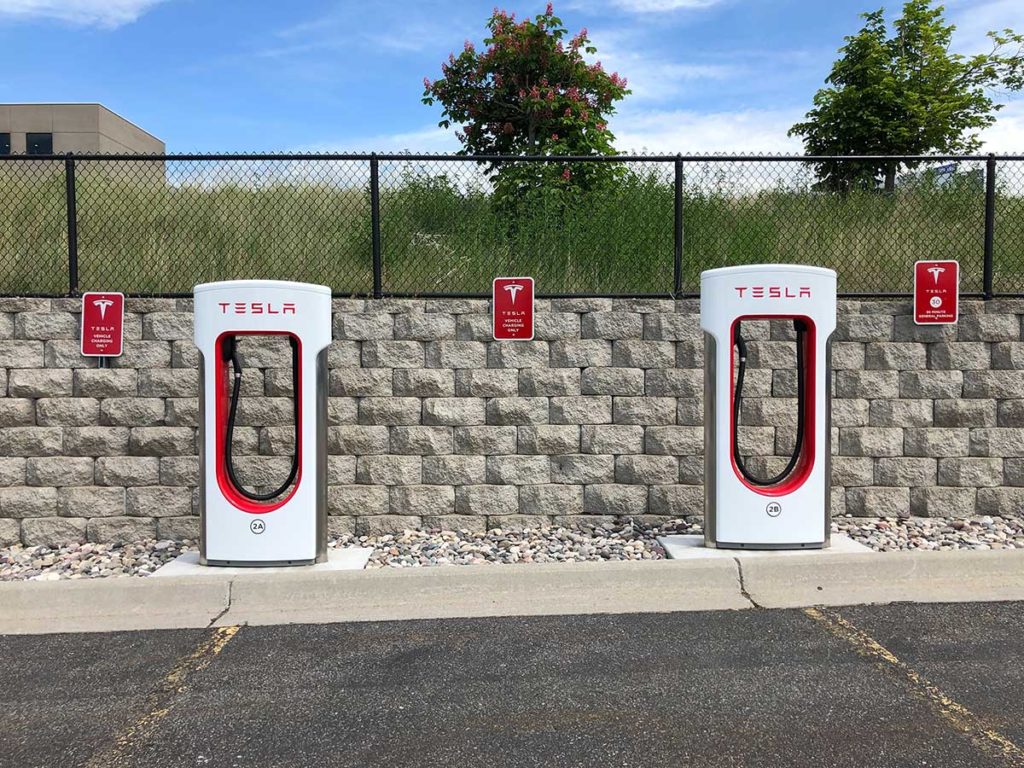 The bigger issue was the need for pull-in/pull-out length for each charging bay, cutting the limited street parking by more than half. Yes, we could put this all in a license agreement and have the insurance coverage protect the City as an authorized encroachment, but this was not ideal as residents would lose two out of three parking spaces in this revitalized urban area where every available parking space is at a premium.

This was a simple and reasonable solution that could work on any existing street section….

Changing and reducing the parallel parking spaces was not allowed. We learned, however, that the street grid in the district was mostly all on one-way directions. With this knowledge, we found a solution to the dilemma we faced by eliminating parallel parking and shifting the through lanes so angled, back-in parking could be provided while hardly reducing the existing parking capacity. Also, small concrete leveling pads could be introduced near the back of the designated charging stall to help level out the rear axel with the front where the inductive pad was to be placed. Normal road cross-slopes could be maintained and raised curb islands could be added to provide more protection for the charging pad, bollards, and leveling pads. These raised islands also added a spot for new planting material in the street grid. The remaining issue was protecting the pad surface as it should not be driven over. Tightly placed bollards keep the vehicle operator on course and will greatly reduce potential damage to the pad. This was a simple and reasonable solution that could work on any existing street section if it is wide enough and the traffic can operate in a one-way flow. 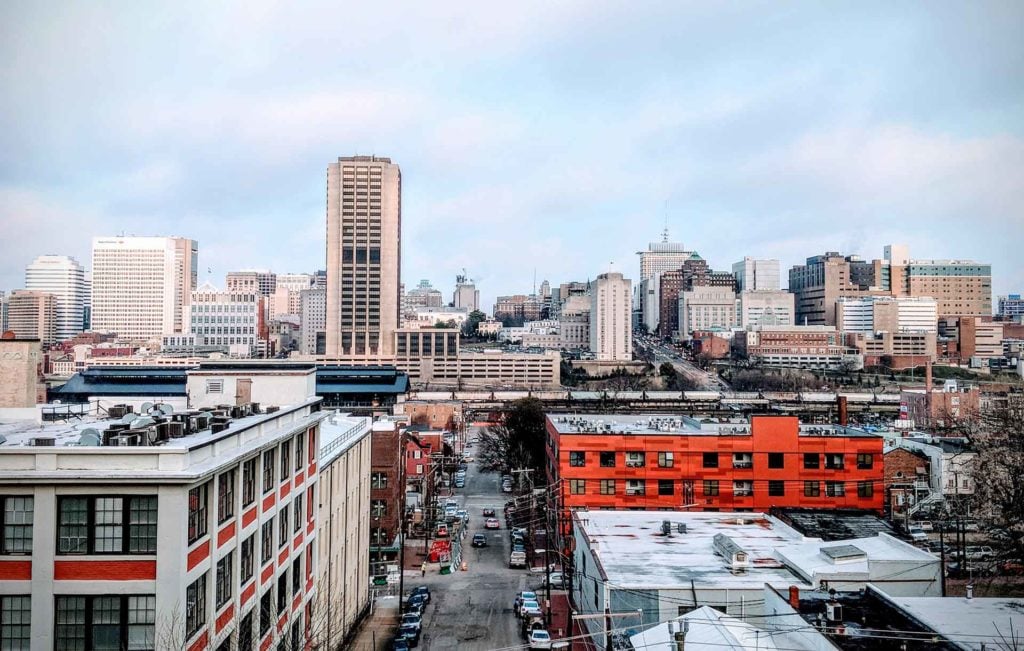 This worked out perfectly for us, but the thing we must think about in the future is what other circumstances would make it difficult for plug-in or plugless changing stations to be built, and how can we adapt to them? It’s an inevitable reality that parking for a business meeting or grocery shopping and needing a charge will be necessary in an EV trending world, so how can we make that as accessible and nonintrusive as possible?

This is the ultimate question we will have to answer as the transportation world continues to evolve and EVs grow in popularity. RK&K is ready and willing to adapt alongside the industry and grow with the new technology, creating winning solutions based on the specific needs of each project and its surrounding community.