Uniqueness and/or Innovative Applications of New of Existing Techniques

The most prominent feature of the project is the eight-foot-wide pedestrian bridge that winds through the forest canopy adjacent to the existing stone arch bridge. The existing bridge was too narrow to support the addition of a sidewalk and providing a continuous sidewalk along the corridor was a critical safety component of the project. The design team considered many options, and the selected design included a new pedestrian bridge to provide the pedestrian connection while respecting the existing stone arch bridge. 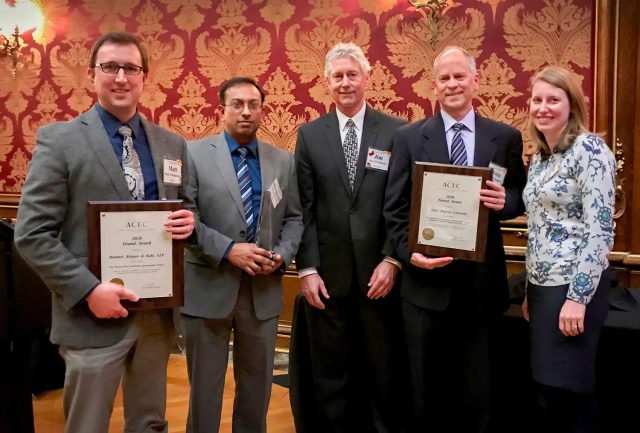 Future Value to the Engineering Profession and Perception by the Public

A continuous and much-needed pedestrian walkway did not exist along this corridor. This was an extremely dangerous situation to have sidewalks end, forcing pedestrians into the roadway. Based on traffic counts showing San Martin Drive as a high-speed cut-through across campus, traffic calming was greatly needed and achieved by adding a 3-way stop control, narrowing the roadway, reducing the size of intersections, providing additional signs, planting additional canopy trees along the roadway, and adding rumble strips. The project directly serves thousands of students on the Homewood campus, as well as many pedestrians and bicyclists in the neighborhood, who use the corridor for recreation.

The project was classified as a redevelopment project by Baltimore City Department of Public Works for stormwater management. In the existing condition, there was a lack of any stormwater management treatment in the roadway corridor which discharges to Stony Run, an impaired waterway in the City. This was addressed with 588 linear feet of bioswales and 750 square feet of microbioretention. The result is a continuous walkway from University Parkway to Remington Avenue that provides a recreational opportunity for the surrounding neighborhoods and campus communities and doubles as an effective stormwater management tool.

Many challenges faced the team while undertaking the design of the pedestrian bridge, including steep topography, shallow rock, existing mature trees, and the long stretches of adjacent forest conservation easements. RK&K performed a tree inventory, removing those in poor condition to improve safety along the corridor. To solve the terrain challenge and minimize impacts to the mature forest, RK&K designed the pedestrian bridge utilizing micropiles that could be installed with equipment small enough to work around the trees and under the canopy. The bridge’s structural components were also designed to be small and light enough to be erected utilizing a “top down” approach so that equipment would not be working on the forest floor impacting the tree roots. The result is a pedestrian bridge built in the canopy of a mature forest setting.

This project accomplished the three main principles that guided the project from design through construction: 1) Improve pedestrian safety and connectivity; 2) Address drainage issues and provide stormwater management treatment; and 3) provide aesthetic improvements to the corridor.