RK&K is the major subconsultant to HNTB providing Program Management Services to VDOT for this $480 million P3 Express Lanes Project. While the new eight miles of Express Lanes are currently under construction and set to open in fall of 2019, the project completed one major milestone marked with a Ribbon Cutting Ceremony in May.

The ceremony celebrated the opening of the Pentagon South Parking Lot Improvements. Lot improvements were estimated at $10 million and were funded by a federal “Fast Lane” grant, as well as a combination of VDOT and federal funds. More than 1,800 buses and about 3,400 “sluggers” on average pass through the South Parking Lot each day. Improvements to the lot include new bus-only travel lanes and reconfigured HOV/commuter and “slug” lanes that were designed to enhance traffic flow, connectivity and safety in this heavily traveled area of the Pentagon Reservation. With nearly 25,000 employees, both military and civilian, the Pentagon Reservation is one of the region’s busiest commuter locations and transit points for commuters. The South Parking Lot serves as the destination point for many, as well as a transfer hub for people who haven’t yet reached their final destination. 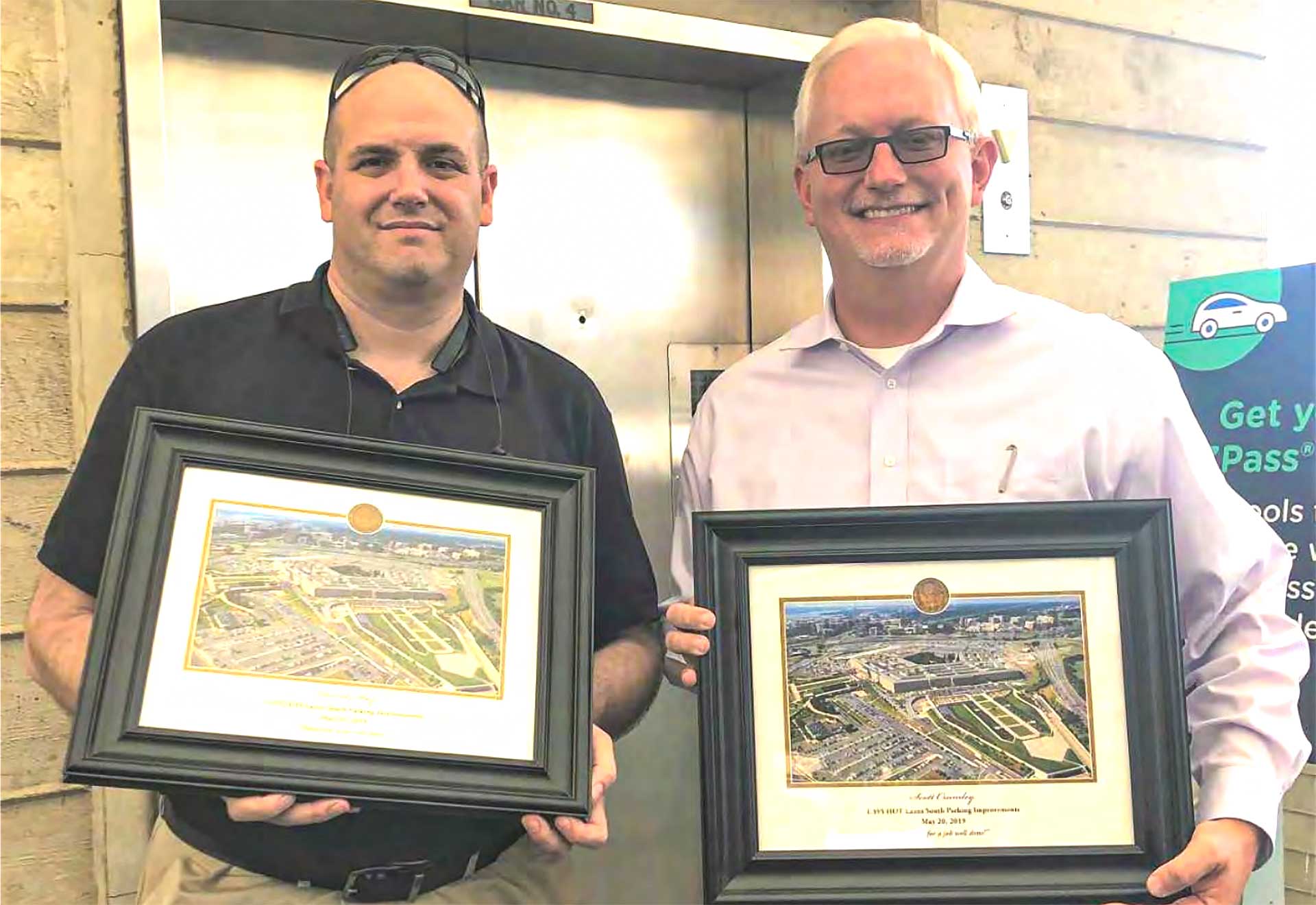 David May and Scott Crumley were recognized with a special picture and plaque at the ceremony by the Pentagon.

Congratulations to Scott Crumley, David May, David Law and many others from the DC, Fairfax and Baltimore offices who have supported this project. Since the fall of 2016, RK&K has provided geotechnical design support, environmental compliance support, construction management and safety oversight and traffic management services. RK&K also led the development and implementation of a Regional Transportation Management Plan including more than $6 million of work zone mitigation strategies including traffic analysis and modeling, incident management and enforcement, supplemental transit service as well as several TDM (Travel Demand Management) strategies such as carpooling, vanpooling, telework and employer outreach. One of the most effective strategies has been a new permanent Commuter Store at the Pentagon which provides information on the myriad of non-SOV (Single Occupancy Vehicle) commuting options through the I-395 corridor.

David May and Scott Crumley (shown above) were recognized with a special picture and plaque at the ceremony by the Pentagon for their hard work and dedication to coordinating and keeping traffic moving throughout construction.