Clifton Park in the City of Baltimore, a project where RK&K’s site development team served as civil engineer, was named Public Park of the Year by Racquet Sports Industry. 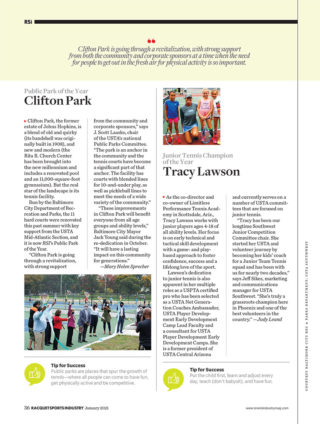 RK&K’s work for this project included developing site plans, grading, drainage, and sediment control plans. Clifton Park, with 11 tennis courts with lighting, is heralded as a shining centerpiece for members of the East Baltimore community.

“The park is an anchor in the community and the tennis courts have become a signiﬁcant part of that anchor. The facility has courts with blended lines for 10-and-under play, as well as pickleball lines to meet the needs of a wide variety of the community,” states J. Scott Laasko, chair of the USTA’s national Public Parks Committee, in the article.

The full article can be read here (on page 38).