What is it like being an environmental scientist? I’ve come to find that the career is not only one single job, but many skills interwoven and overlapping. Often, a day at the office or in the field can turn out far differently than what I had imagined in the morning. Would I need to use my skills as a geologist – as I had studied for in college – or would I need to call on different abilities to tackle unexpected challenges? Would I be more of an accountant today? Field manager? Geographer? Salesperson? Safety inspector? A consultant can be called on to be any of these professions, and more.

Although most days involve the application of environmental science, there are plenty of opportunities for the unexpected within this field. One of these opportunities came up recently at a site development project. This project is for a planned recreational facility that will be an integral part of the city’s redevelopment, revitalizing the area. But the planned location was once in the heart of an industrial area, and was the site of an old railyard, a rubber cement mill, an industrial chemicals manufacturer, coal yard, and more.

To determine the historical risks to the project – and the risks to the people involved in its construction and those using the completed facilities – we need to characterize what’s been left behind, buried underneath a parking lot. Environmental laws protecting human health and the environment from the hazards of waste disposal typically focus on soil and groundwater. Both of these media can hold onto long-term hazards, and be a risk decades after everything looks cleaned up at the surface. But more and more, another factor is being recognized as a secondary risk, contaminant vapors accumulating within the pore spaces in soil and moving into occupied spaces on the surface. 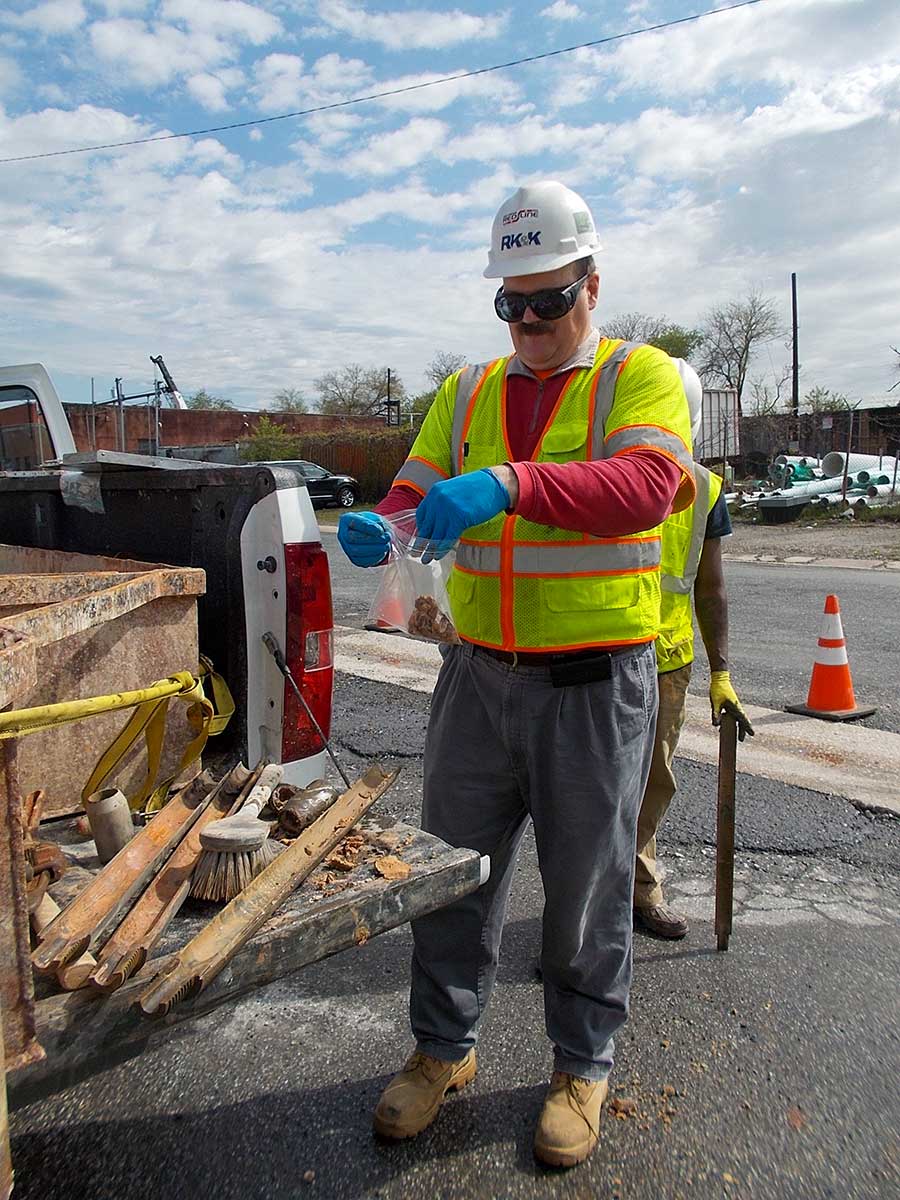 Several volatile compounds have been recognized as presenting risks for vapor intrusion into buildings and other interior areas, presenting an exposure risk to people living and working inside. Some compounds that are particularly hazardous through this pathway are petroleum compounds (like benzene and toluene), dry-cleaning compounds (like tetrachloroethene) and industrial solvents (like methyl ethyl ketone). Being in a former industrial area, with an impermeable asphalt parking lot cap, this site’s soil-gas was considered a potential pathway that needed to be investigated.

“The main tool to sample and analyze soil-gas is the soil-gas monitoring probe.”

The main tool to sample and analyze soil-gas is the soil-gas monitoring probe. It’s a thin steel tube that is set within the soil with a mesh exterior at a desired depth, typically four to five feet below ground surface, with a loose sand pack around it to stabilize it. Vapors from within the surrounding soil are given the time to equilibrate within the tube, then are pumped out of the ground for laboratory analysis. These have proven to be effective in determining the presence and concentrations of hazardous vapors in the soil and an excellent tool to determining the risk of these vapors entering human habitations.

But how do you ensure that the soil-gas monitoring probe is secure? If the probe was improperly constructed, a tiny crack in the surface could allow ambient air down into the probe. If that happens, when you’re pumping the soil-gas out of the probe, you might be simply pulling ambient air down into the soil, then pulling it right back up to be collected, giving you results that say nothing about the ground underneath. To ensure this was not happening, I constructed a helium shroud to cover the monitoring point and the ground surface around it. The shroud consisted of a plastic bin, plastic wrap, and a few cardboard rings. The simplicity of design gets the job done. Using a helium tank, we filled the shroud with a mix of at least 20% helium gas, then started pumping out the probe. If there was any helium in the soil-gas coming out of the probe (measured by a helium gas detector), then we would know that air is being pulled underground and the probe is compromised. It might not look the most dignified activity for a certified professional geologist, fiddling around with a bright pink tank declaring “Balloon Time!” But if that gets our client the data they need, I’ll take it. 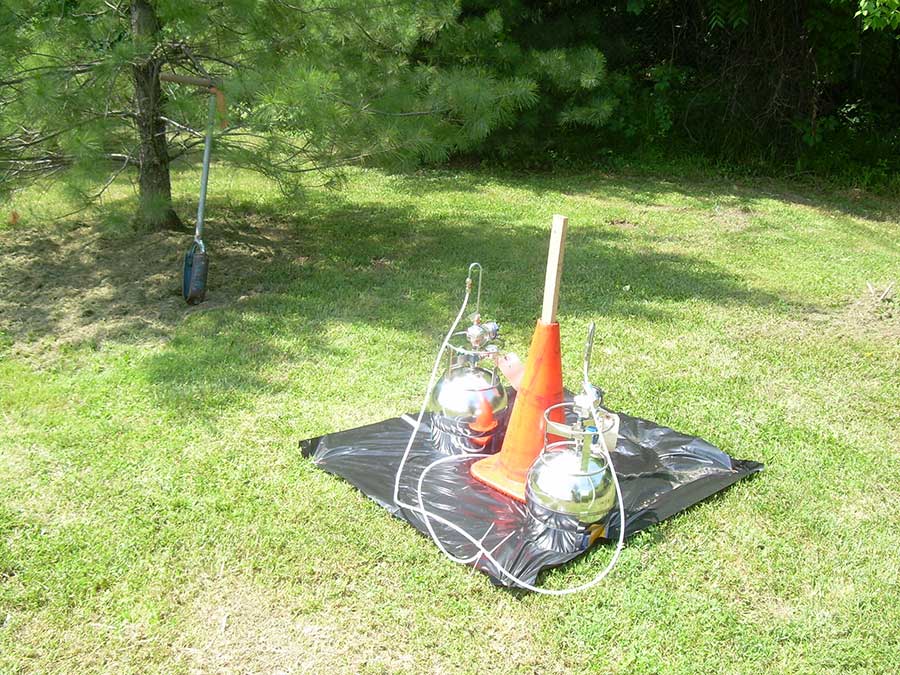 While checking the integrity of the monitoring points, the site presented us with another unexpected challenge. Although I said that the vapors in the soil equilibrate with the space inside the tube – that doesn’t really happen on its own. There’s always a gradient of vapor concentration from the soil into the sampling equipment. That “system volume” needs to be removed before sampling, or else the laboratory result would be a mix of the soil-gas and air that has stayed in the tubing during construction. The standard procedure is to use a syringe to pull all of the air out of the tube and sand pack. When you feel a “tug” pulling back on the syringe, that means you pulled out all the system volume, creating a vacuum, and are now pulling out soil-gas from the tiny pore spaces in the soil – requiring much more force to pull. Reading the syringe when you feel that tug gets you the probe’s system volume.

After we installed and tested the soil-gas monitoring probes, we tried to get those system volumes, but this was the wrinkle – there was no “tug” from the syringes. Why? The soil was waste fill, dumped there decades ago to cover up the wetland – and back then, there weren’t too many concerns about compaction standards. So there were wide enough gaps in the soil pores that we could pull the syringes all day and encounter freely flowing soil-gas.

“One of the best methods for sampling groundwater is low-flow sampling.”

So how could we know when we’re sampling soil-gas unmixed with system volume air? Fortunately, we were able to call on our experience sampling many hazardous-material sites. One of the best methods for sampling groundwater is “low-flow sampling.” This technique involves slowly pumping groundwater out of a well while carefully measuring the water’s parameters – such as dissolved oxygen, temperature, pH and turbidity. These values will change as the groundwater is pumped out, but once they have stabilized, you know that the pumped water is representative of the groundwater, and samples can be taken.

Eureka! We can write up a protocol for soil-gas that mimics the low-flow sampling for groundwater. There are several multi-gas meters that are used throughout the industry for personal safety monitoring, and can be adapted for this purpose. Using a meter that detects concentrations for oxygen, methane, carbon monoxide and hydrogen sulfide, we slowly pumped out the soil-gas from the probes, taking readings every 30 seconds until these values stabilized. We took the samples we needed, assured that these were professionally and rigorously collected.

“Work like this … depends on all of us to apply the interwoven and overlapping job skills that are required from consultants every day.”

Ah, but there’s always another wrinkle, isn’t there? One multi-gas meter reading stood out from the others – methane. These readings were above regulatory thresholds and required mitigation to prevent potential vapor intrusion or accumulation. Where did this methane come from? Possibilities include decomposing marshland or diesel spills. Previous investigations gave no indication of methane accumulation at this site. Ensuring that the data was valid was crucial to identifying the primary concerns on this site and developing a system to mitigate them. Work like this – to protect the client and the human and environmental health concerns – depends on all of us to apply the interwoven and overlapping job skills that are required from consultants every day.