That’s the first answer you will probably receive from one of RK&K’s more than 60 NEPA practitioners when asked about the National Environmental Policy Act – the nation’s most important environmental law, enacted on January 1, 1970. Here are some more answers to frequently asked NEPA-related questions:

Q: Does NEPA prohibit impacts to environmental resources?
A: It depends.

Q: Do federal and state regulatory agencies get involved in a NEPA project?
A: It depends.

Q: How should the public be involved in a NEPA project?
A: It depends.

Q: How many project alternatives need to be considered?
A: It depends.

Q: How long does it take to get NEPA approval?
A: You get the point.

The years leading up to and immediately following the passage of NEPA were the pinnacle of the environmental movement in the United States. People were shocked and concerned by ongoing environmental degradation of the land, water and air caused by industrial and infrastructure projects. These projects were having an enormous impact not only on the natural environment, but also the human environment.

Major projects and programs undertaken by the federal government, including construction of the Interstate System, had benefits to society but also substantial environmental impacts that were not appropriately considered during planning and design. Moreover, people affected by the project had little say in how the project was advanced. Projects like the Capital Beltway (I-495) and the Wilmington Expressway (I-95) in Delaware, both constructed in the mid-1960’s, were highly controversial because of their environmental impacts. 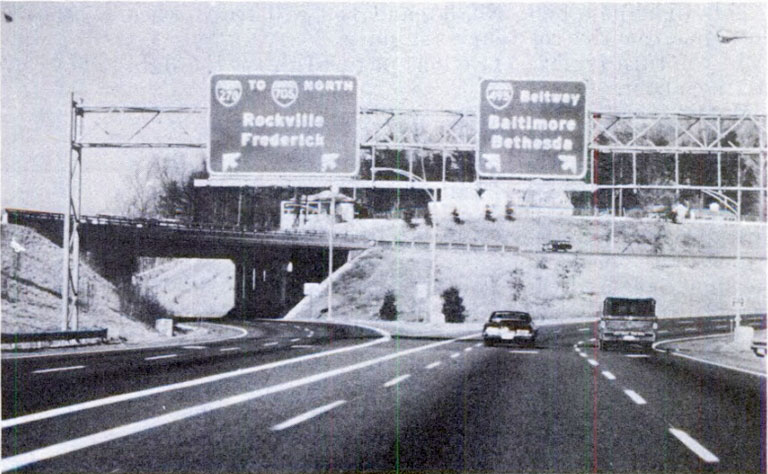 The Capital Beltway (I-495) around Washington, DC was completed in 1964. Part of the roadway was constructed through Rock Creek Park and faced substantial controversy from surrounding communities. 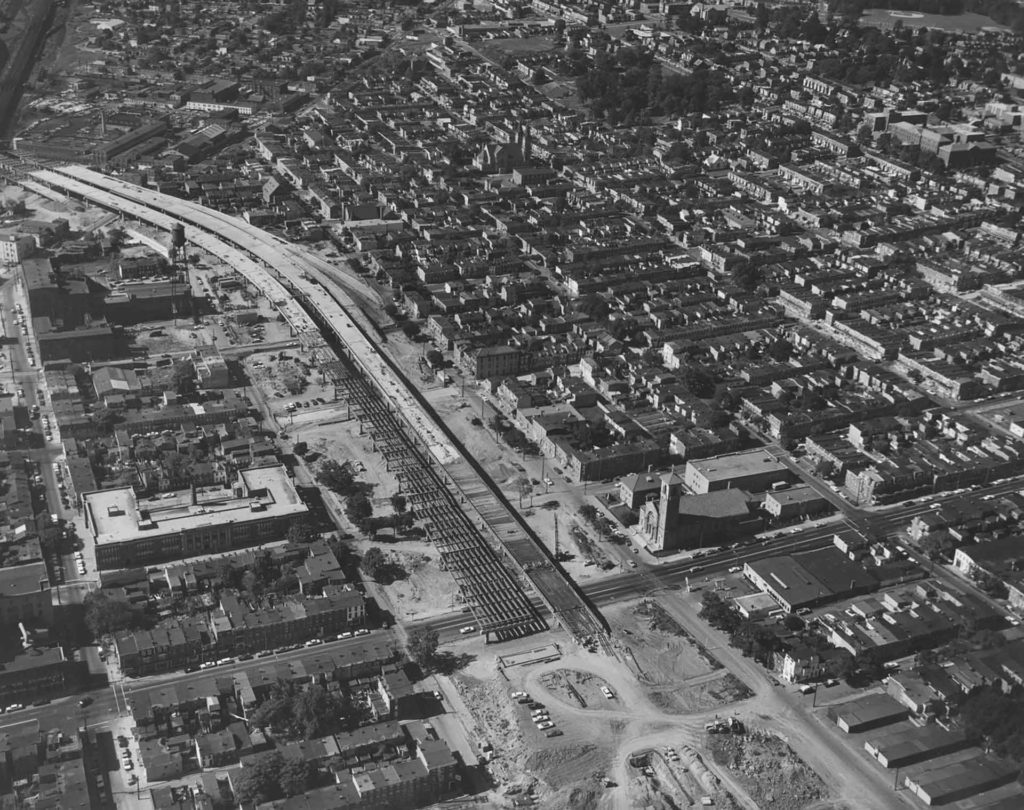 I-95 was constructed through the heart of Wilmington, Delaware in 1965. The project required demolition of 370 homes and divided minority and low-income communities, and contributed to civil unrest that occurred in the late 1960’s.

Most of the landmark social and environmental laws, such as the Civil Rights Act (1964), National Historic Preservation Act (1966), Clean Water Act (1970), Clean Air Act (1972), Endangered Species Act (1973), and Resource Conservation and Recovery Act (1976) were passed during this period. Each focused on particular human and natural environmental issues.

NEPA is different. As the name of the Act implies, NEPA doesn’t protect resources per se; it sets the environmental policy that federal agencies must follow.

Since NEPA was enacted, project development has become much more open and transparent to the public.

NEPA engineering, environmental, and public involvement reviews include many variables. Similarly, there is not a pre-determined outcome for any particular project, since the outcome is not identified until the alternatives development, identification of impacts, and public involvement process is complete. Thus, the response to any NEPA question almost always begins with “it depends” and is followed by additional analysis. There should never be a quick answer given the complex nature of environmental issues for major projects.

Since NEPA was enacted, project development has become much more open and transparent to the public. Overall, this has led to better decision-making and wiser choices for public infrastructure investment. But many projects, including interstate projects, face substantial opposition, legal scrutiny and regulatory challenges through NEPA. 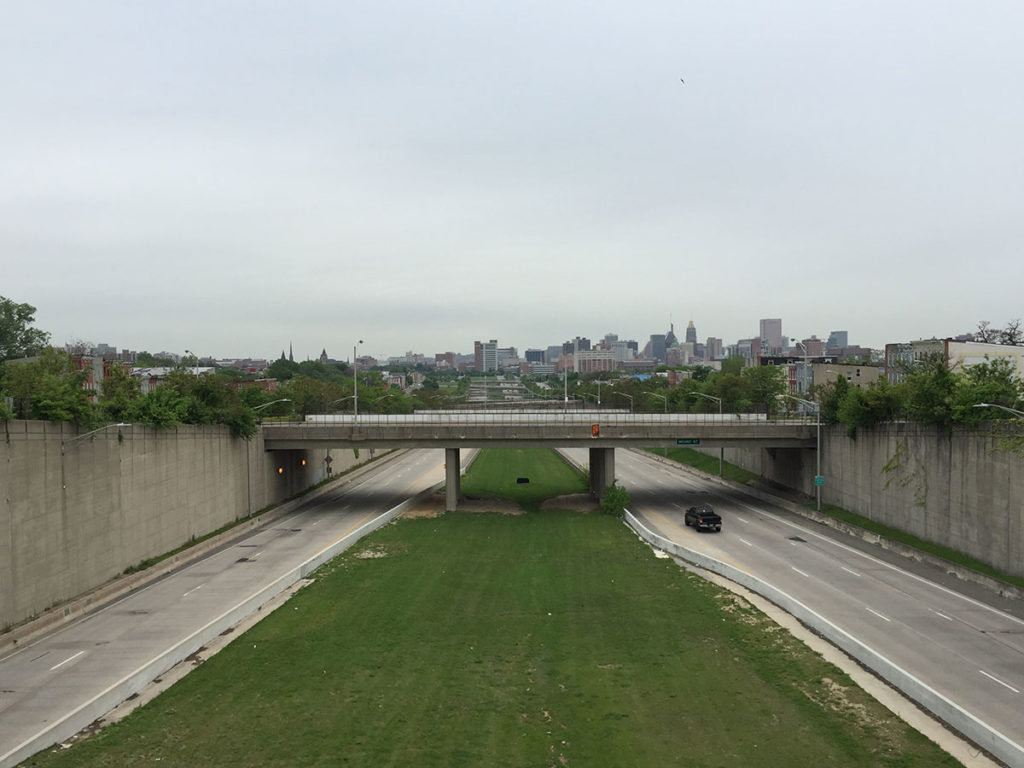 This 1.4-mile segment of I-170 in Baltimore (now signed as US 40) was completed in 1979 and required demolition of more than 900 homes. Although intended to connect to I-70 and other interstates around Baltimore, community opposition, armed with NEPA and other environmental laws, led to the rest of the project being cancelled in 1981. Today the segment remains as a “road to nowhere.” (Photo Credit: Famartin / CC BY-SA)

Even projects that were partially underway when NEPA passed, like I-70 / I-170 / US 40 in Baltimore, were ended midway through construction. Although not formally stated, one could deduce that the NEPA review process for these projects identified an environmental impact and public controversy that was too great relative to the potential transportation benefits.

RK&K has been at the forefront of NEPA environmental review since the early days of NEPA. Two recently retired partners at RK&K, David Wallace and Bill Hellmann, successfully led some of the first NEPA projects in Maryland: I-97, I-68, MD 10, I-795 and the Fort McHenry Tunnel. 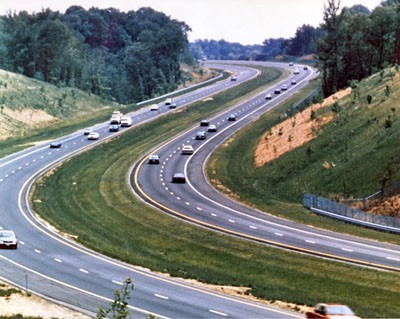 I-97 in Anne Arundel County, Maryland opened in 1987 following NEPA leadership from RK&K.

Over the last 50 years, the NEPA requirement that each federal agency must consider all environmental impacts has evolved into a truly multi-disciplinary approach to project development. As such, engineers and decision-makers now consider the views of planners, scientists, and other specialists within their own organizations to help find the best solution for a project.

We have grown RK&K’s NEPA practice to keep pace with the changing needs of NEPA. We now have full-service capabilities to meet the requirements of any NEPA transportation project, thereby helping our Department of Transportation clients always find the best possible solution.

Today, our NEPA teams are working on some of the largest and most complex projects in the United States, such as the Hampton Roads Crossing Study in Virginia and the I-495 and I-270 Managed Lanes Study in Maryland. 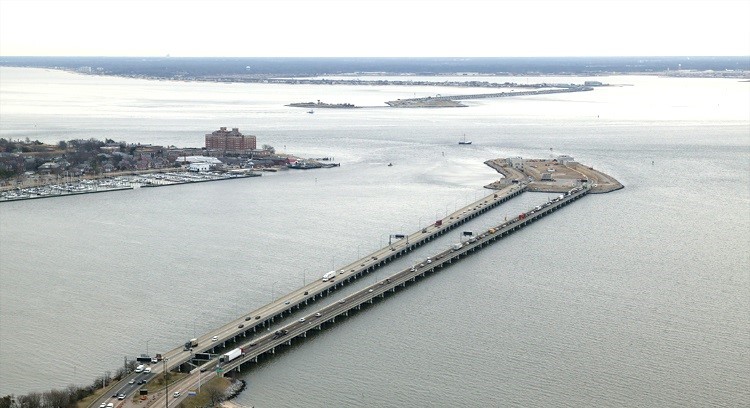 RK&K completed the Hampton Roads Crossing Study Supplemental EIS in 2017. It was one of the fastest EISs ever completed in the US, and is currently under construction as the largest infrastructure project ever in Virginia.

RK&K is currently leading the I-495 and I-270 Managed Lanes Study EIS, which would provide additional capacity to the Capital Beltway. This photo shows the same interchange as the above photo from 1964…but with a little more traffic. (AP Photo/Manuel Balce Ceneta)

The requirements for NEPA are complex. I am proud to say that RK&K has had a substantial influence on the evolution of NEPA practices. Our staff is here to help navigate the many twists and turns of environmental review and develop the best project solution. Just remember, it may take a while to get a straight answer from us when first asked about NEPA. After all, it depends.