With President George H.W. Bush’s signature in 1990, the United States became the first nation to comprehensively declare equality for people with disabilities. From the White House lawn Bush famously said, “Let the shameful walls of exclusion finally come tumbling down.”

The ADA, along with the 2008 Americans with Disabilities Act Amendments Act (ADAAA), protects the rights of anyone with a disability. It covers all areas of public life, including transportation, government services, schools, public buildings, communications, and any private places which are open to the general public. 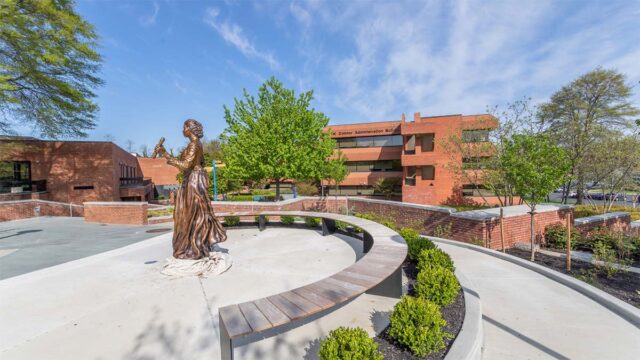 Statue of Fanny Jackson Coppin on the campus of Coppin State University in Baltimore with an ADA compliant ramp.

“Accessibility benefits everyone. For example, curb cuts on sidewalks made it easier for people pushing strollers, the elderly with walkers, or those rolling a bag behind them,” said Digital Communications Specialist Tom Ostrye, a member of RK&K who has a mobility impairment.

RK&K is proud of our diversity and inclusion efforts in our work and our communities. Innovative design can help protect and make communities more inclusive and accessible for all users regardless of their physical abilities.

“Creating a better world means creating a more accessible world. This is something neither my teammates at RK&K nor I lose sight of in our work,” said Senior Project Engineer Kush Vashee, PE, CAPM, ENV SP, LEED GA.

A request from the community in New Castle, Delaware led to the recent design of pedestrian upgrades to include ADA-compliant curb ramps, pedestrian signals, marked crosswalks, and bicycle facilities in an effort to improve accessibility and safety.

“This was a very rewarding experience, as all neighbors were very appreciative of this effort and shared that they were encouraged by seeing something realized they had advocated for,” said Technical Manager Joost Van Boekhold, PE.

Accessibility for all is also critical in RK&K’s community involvement in Baltimore City. Most of the city’s infrastructure, including sidewalks, intersection curb ramps, and pedestrian signals are not ADA compliant. Our Planning and Traffic teams are working with city leaders on a Transition Plan, required by law, to make sure the city’s infrastructure achieves full ADA compliance.

“As the father of a child with a mobility disability, I know firsthand how challenging it can be to navigate some of the sidewalks and intersections in Baltimore,” said Director Jim Burnett, PE, PTOE. “While much work is needed to bring the city’s roadways into full ADA compliance, it is exciting, both on a personal and professional level, to work on the development of Baltimore’s first-ever ADA Transition Plan. This is truly a project that has the potential to significantly improve quality of life for the many thousands of people with disabilities who live in, work in, or just visit Baltimore!”