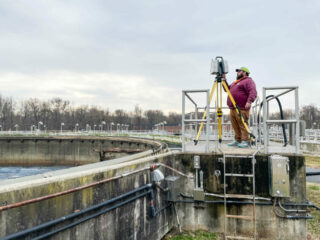 When you think about the idea of lasers and how they can be used, you might at first conjure up images of sci-fi movies or futuristic space aliens.

However, lasers have a lot more realistic and useful applications which RK&K has recently utilized during our work on the Sod Run Wastewater Treatment Plant (WWTP) for the Harford County Department of Public Works Division of Water and Sewer.

The overall goal of this project was to repair, rehabilitate, and upgrade the plant’s two concrete primary clarifiers, which have a rotating arm that collects the sludge that settles out of the water and pushes it toward a pit in the center of the tank.

To accomplish these improvements, the team had to know what they were working with in terms of the clarifiers’ current state. Naturally, nobody was too eager to dive into the large, sludge-covered tanks to get the necessary ground shots themselves, so they let lasers do the dirty work for them.

RK&K’s Survey team set up a laser scanner at multiple locations around the tanks to generate a full 3D model of the two tanks over three days.

The laser scanner collects data on anything the laser touches by measuring distance by timing the laser pulse, he added. At Sod Run, the team set the scanner to scan 120 meters in 15-minute increments, which means they received data collection in a complete 360-degree sphere the size of the clarifier.

“The amount of data the laser scanner can collect in those 15 minutes is unmatched by robotics or conventional surveying methods.”

The scanner provided a full 3D representation of the structure, collecting data points 0.005 feet from each other. This model then can be used in the office for analysis and design.

With conventional survey means, data points are collected every 30-50 feet, but with the scanner, the team has the entire site, including “all the nooks and crannies,” said Sam.

Senior Project Engineer Allan McBride said after the data was collected, the Structures team took over. They used an add-on to view the laser-generated point cloud from multiple angles and evaluate the consistency of the floor slab elevations and slopes and determine the overall levelness of the tanks.

The software created colored-coded contour plots which near instantly showed the team that something wasn’t quite right with the floor slab of Primary Clarifier No. 1.

Allan said the floors of these clarifiers are supposed to have a consistent slope toward the center of the tanks. In a contour plot, this would show up as nice round circles, as was the case for Primary Clarifier No. 2, however, the circles of Primary Clarifier No. 1 were ragged and off center.

With this knowledge and the comprehensive visuals to work from, the team was able to present a clear picture to the client of the deficiencies of Primary Clarifier No. 1 and find the solutions needed to move the project forward.

Allan said that this project not only highlights the benefits of innovative technologies such as laser surveying, but it also showcases the importance of collaboration between RK&K’s Wastewater, Structures, and Survey groups.

The use of laser scanning has a lot of benefits in the field. Sam said the laser scanner can reach where humans cannot, so if his team needs data from a busy highway or high-speed railway, they can set the scanner out of the line of danger and still collect data without any risk.

The scanner can also collect data that appears out of reach, like overhead signs, bridges, or powerlines.

“Laser scanning is the future, and the future is now!” said Sam.