Kelly graduated from college with a B.S in Biology, but didn’t end up using her degree until after she stared working at RK&K. Kelly started at RK&K in 2016 after she interviewed for the role as Administrative Assistant in the Richmond office. During her interview, the Manager realized Kelly had a degree in Biology and said “Well, maybe one day if you’re up for it and interested, we could put you into our natural resources team,” which is what eventually happened. From there, Kelly received her certification to become a compliance inspector. 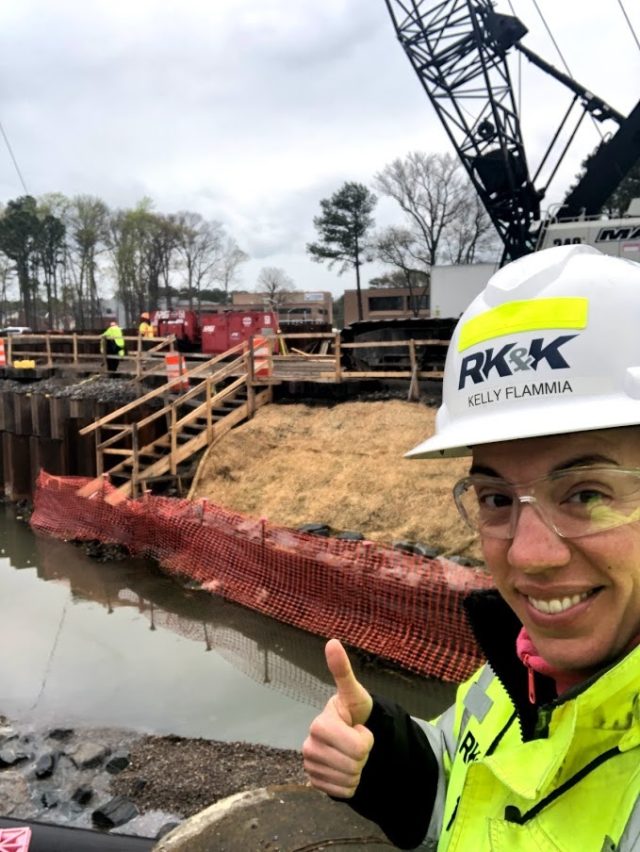 In her role as Environmental Scientist, Kelly watches over the project crews and team members on site to make sure they are abiding by the water quality permit and things of that nature.

The first thing Kelly does when she comes into the field office, which is onsite, is check in with the other inspectors and see if there is anything they need to follow up on that happened the previous day. Then the schedule of the day’s activities comes out, so she will go over the list and see what’s happening in the permitted areas like wetlands or streams, because those are the areas she needs to focus on to monitor for those activities.

“I appreciate instances like that were I can see directly that I’m having an influence here and that it’s more than just me and that I’m doing good work for the world and protecting our natural resources for generations to come.”

And then from there, Kelly will leave the field office and is on site the rest of the day going to those locations, one after the next if it’s multiple activities happening in the same day. If it is an inspection day, then Kelly will host a variety of people from other departments within DDOT (District Department of Transportation) or the Corps of Engineers and facilitate the inspection process with them, taking them around, showing them what they want to see, and answering any questions they may have. Some frequent questions Kelly is asked are, “What’s the next step?”, “What’s your plan going forward?”, “Do you have any issues about what the plans call for in terms of erosion and sediment control?”

During a typical day Kelly does a lot of mediating and monitoring, she also takes lots and lots of pictures. Kelly uses a program called PlanGrid to generate daily monitoring reports and to communicate issues that may come up in the field. Kelly is usually outside, walking around, looking at things, taking pictures and answering phone calls, answering questions from all those other parties. Mediating and monitoring are Kelly’s two main tasks.

The most fulfilling part of Kelly’s work is when she has an opportunity to protect or rescue wildlife. One day they found an injured Mallard duck that was close to the site. Kelly reached out to the local wildlife groups and a woman came with a net and duck food and was able to safely secure the duck and get her back to a rehab facility. Things like that are really heartening. Kelly was glad she could step in because otherwise that duck wouldn’t have made it.

Another time there was a duck nest that the mother decided to lay her eggs in a very precarious position right in the middle of the activity. They surrounded the area with caution tape and alerted all the crews as to where it was. The crew was really good about leaving her alone until her babies had hatched. Kelly said, “I appreciate instances like that were I can see directly that I’m having an influence here and that it’s more than just me and that I’m doing good work for the world and protecting our natural resources for generations to come.”

Unfortunately, not all days Kelly gets to save baby ducks from danger. Some days things go wrong. For example, if there is a discharge of dirty water or some sort of erosion and control measures fail, they have to initiate a corrective action plan and report it to the agencies and deal with the fallout from those sorts of things. But it is construction. Things happen. Kelly and her team do their best to be responsive and to take care of things when they do happen. But those are not the most fun days when they do.

When asked about her proudest achievement, Kelly said, “I think just seizing the opportunity that they gave me to move into the National Resources Department and then capitalizing on a specific opportunity to come to a major VDOT project as a full time environmental monitor and kind of flesh out the role when no one really had a clear idea of what my day to day would look like. I get to make it my own and take ownership of it. I am also proud to be a face for women in the industry where we are certainly a minority, but making it ok and feeling like I belong here, despite those minority numbers, I certainly belong here and can do the job as well as any man.”

Kelly stated that Environmental Compliance is a rapidly expanding field and many municipalities and state agencies are realizing the importance of having someone at the ground level to monitor what’s going on.

When Kelly is not at work, she enjoys creating beautiful art. Check out Kelly’s website and her blog. 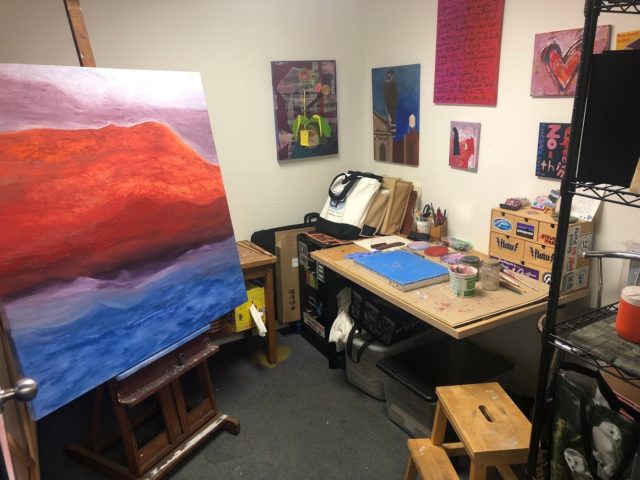