RK&K was recently honored with two Best in Construction Awards from the Florida Transportation Builders’ Association. While the two projects differ in scope, size, and services provided, both are testaments to RK&K’s abilities to overcome challenges and use technical strength to complete successful work for our Florida clients. 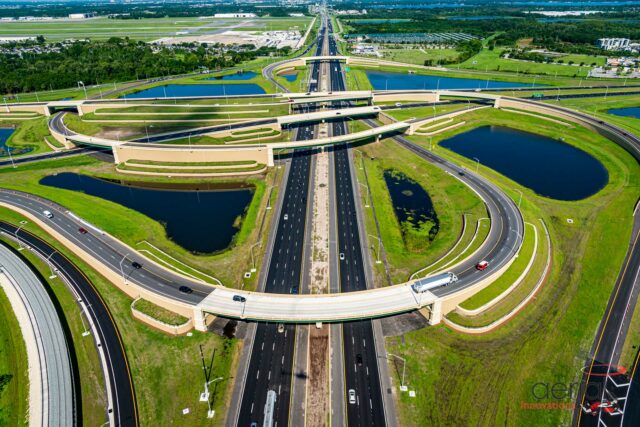 RK&K’s work on the $108 million reconstruction of the interchange between SR 528 and SR 436, which serves as a gateway to Orlando International Airport (OIA), the world’s seventh-busiest airport, was recognized as the Expressway Authority Project of the Year.

The project expands capacity and improves traffic flow and safety as OIA opens its third terminal in late 2022, anticipated to handle an additional 10 million passengers to its over 70 million already served annually.

RK&K’s work included the construction of seven new bridges with six utilizing steel tub girders. Five of the bridges span SR 528, two of which replace existing SR 436 overpass structures to SR 528 and the sixth serves a ramp overpass to SR 436 NB. A seventh bridge acts as the SR 436 overpass to the busy SR 528 eastbound ramp to northbound SR 436 which utilized Florida U-63 Beams. The project also included the addition of one additional travel lane in each direction on SR 528 and improvements to signing, lighting, ITS and Fiber Optic Network, and several sustainability elements to minimize landscape and road maintenance impacts.

Three of the bridges were multi-phased, sequenced for the construction of new bridges and associated demolition of the existing bridges. The project team developed an alternative traffic control plan for one of the phased bridges, allowing construction and demolition to occur one sequence instead of the multi-phased sequence originally planned.

Director of Construction Inspection/Field Mike Lausier, PE explained that because of its critical infrastructure significance of serving as a gateway to OIA, the project was categorized as a “Project of Critical Concern.”

“The most qualified contractors were necessary due to the compressed and aggressive schedule, which then was compressed even further by an incentive/disincentive provision that included a 180-day maximum early completion bonus,” he said.

To accommodate this aggressive pace of construction and adjustment to conditions that could be encountered, the project utilized steel H-Pile foundations. Pile work was coordinated in real time between Contractor, design and construction Geotechnical Engineers, Engineer of Record, CEI and CFX. The piling portion of the work was a testament to good project planning, engineer/design, construction/installation, inspection, and project management. The work was completed without pause and included adjustments as necessary to meet encountered conditions. Final quantities of work varied only slightly from initial planned. All decks, or initial phased deck, to all bridges were completed within the first year of construction.

“This complex interchange reconfiguration was constructed at an incredible pace during the trying and unknown times of COVID,” said Senior Project Engineer Lindsey Barnwell, PE. “The CEI, designer, owner, and contractor were dedicated to the project success to overcome the challenges and seek solutions that benefited the project. Winning this award solidifies the success and commitment of the team.” 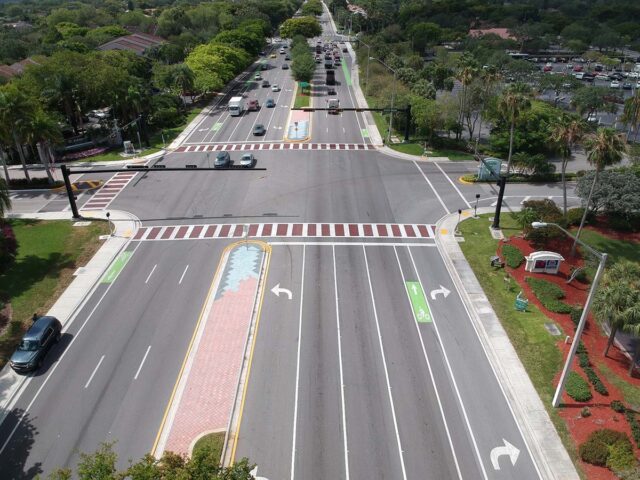 RK&K’s work for this project earned the organization’s “Partnering Award.” It consisted of widening the roadway and rehabilitating the pavement to accommodate new bicycle lanes along Lyons Rd. from Fern Forest Nature Center entrance to State Road 869 (Sawgrass Expressway) in Broward County.

“What is special about this project was the spirit of partnering between the client, Florida Department of Transportation (FDOT), the contractor, RK&K’s CEI Team, and the local municipalities to resolve several challenges and conflicts during construction.  All four groups were actively involved during the COVID-19 pandemic with the ultimate goal of completing the project on time and under budget,” said Project Manager Felipe Gonzalez, PE.

This coordination between parties allowed the team to work smarter by improving their maintenance of traffic phasing and constraints.

Felipe explained that the original Temporary Traffic Control Plans (TTCP) only allowed lane closures during non-peak hours and did not include the option of continuous permanent lane closures for any construction phase except during sidewalk reconstruction at the intersection of Atlantic Boulevard.

Because the project included widening throughout the corridor and drainage improvements at multiple locations, the contractor expressed constructability concerns at the beginning of the project by having to mobilize, excavate, install drainage structures and pipe, backfill, complete base course, install structural asphalt and demobilize daily, which could have compromised the completion of critical path activities on time. Since the pandemic was causing less traffic, the option of having a permanent single-lane closure in each direction to expedite construction and reduce daily mobilization efforts was proposed. This allowed the contractor to work at multiple locations every day without the need to mobilize and demobilize at the end of each workday.

“I think I can speak for the entire project team when I say we never approach any assignment/project with the mindset or expectation of winning an award. The team provided the same high-quality effort and service on the Lyons Rd project as we have on so many others and it’s nice to know it didn’t go unnoticed. This award means a lot to me because it confirms without a doubt that our hard work and dedication have been recognized by our peers,” said Senior Inspector Joseph Poerio.