Traffic jams can bring out the worst in people. Road rage, laying on your car horn, and overall frustration, we’ve all been there and it’s not a proud behavior. However, for RK&K’s Raleigh Highways and Traffic teams, constant traffic jams and back-ups along the I-40 corridor had some benefits. The teams had the opportunity to do what they do best – develop creative technical solutions that solve a project’s complicated problems in the most efficient way possible.

RK&K is currently serving as the Lead Designer on the $360-million design-build corridor upgrade project for the North Carolina Department of Transportation (NCDOT). The team is implementing design on a 13-mile stretch of intersection for anticipated traffic surges, which includes the addition of two travel lanes in each direction, the construction of two diverging-diamond interchanges, and 15 new and revamped bridges.

These upgrades are crucial. Currently, 140,000 vehicles travel the interstate daily, and this number is projected to increase 65% by 2040. But however badly they are needed, the team quickly realized it wouldn’t be easy, or even safe, to start construction while battling the frenzied traffic on the very roads they were trying to improve.

“It’s all about traffic control and how you’re going to maintain traffic and do it safely,” said Director of Transportation Brandon McInnis. “We had to ask ourselves, ‘how can we get this built as safely as possible without adding to the congestion?’”

So, they adapted. The team built a temporary overpass that provided supply trucks and construction vehicles direct access to median and shoulder work areas. The overpass was adjacent to a quarry and concrete and asphalt plants, which made transporting the needed materials easier and less time-consuming. Another addition to the project was a 280-foot-long conveyor belt that moved materials between work areas.

“A lot of this was done so we could keep working during the day and keep the trucks off I-40 and stop them from having to mix with traffic,” said Brandon. “We were able to build outside of traffic.” The results speak for themselves as these techniques removed a projected 42,375 truckloads from traffic during construction.

“These ideas had such a huge benefit on the success and timeline of this project,” said project delivery leader Byron Holden, PE, who provided traffic control and worked closely with the contractor to ensure the design accommodated this unique access. He said NCDOT has worked on multiple interstate projects like these and is open to “creative ideas like what we’ve done on I-40.”

When techniques such as these are successful, the team looks at other opportunities that could benefit from these techniques.

“We’re always looking for new better ways to complete a project in the best way we can,” said Byron.

He said finding solutions like this often involves laying out and looking at a large map of the areas to see what they can do, where they can do it, and what will have the least amount of interference with the traveling public. “Sometimes it’s obvious, sometimes we have to hunt for it,” he said.

The conveyer belt and overpass weren’t the only solutions that needed to be developed.

Brandon said this project had a “living design,” meaning it underwent several changes from the original proposal, many of which occurred in the middle of construction.

The most dramatic of these changes came when Amazon announced they would build a 680,000-square-foot distribution center connected to I-40 with a diamond interchange. Because this new distribution center would unleash traffic-jam-worthy amounts of heavy trucks onto the roads, NCDOT had to tweak the contract to include an expedited interchange upgrade.

“You had this full set of plans and now you have to squeeze this new addition in,” said project manager Mary Mays Yahl. “We had to tie our project to Amazon’s project and we didn’t even know when proposal process started.”

But Brandon said they accomplished the task by incorporating a diverging diamond configuration without adding additional right-of-ways. “We’re installing a median railing to separate traffic and a new sidewalk/pedestrian railing on one side. The interchange is ready-made for Amazon’s trucks and workforce as well as any future development in the area.”

A congested interchange at NC Route 42 also had to be changed into a diverging diamond configuration with two bridges replacing the current overpass.

The two new bridges across the interstate will help with construction staging and the longer dual structures make it easier to plan for 1.4 miles of new two-lane collector/distributor roads that will serve the NC 42 exit and nearby Cleveland Road at the project’s western terminus.

Byron said that these changes were challenging but presented the team opportunities to develop new methods and deepen their coordination and communication with partners like NCDOT and S.T. Wooten. He added that despite these many changes, RK&K’s goal remained the same: take whatever design there was at any given moment and simplify its construction in the safest way possible. “Because things have strayed from our initial plans, we’re always looking for ways to be more efficient and keep the contractor moving forward as things are changing.”

Brandon concluded, “It’s all about doing what we know works technically, even if means trying something out-of-the-box. Even while everything else changes around it, a good design is always built on that proven knowledge and solutions.” 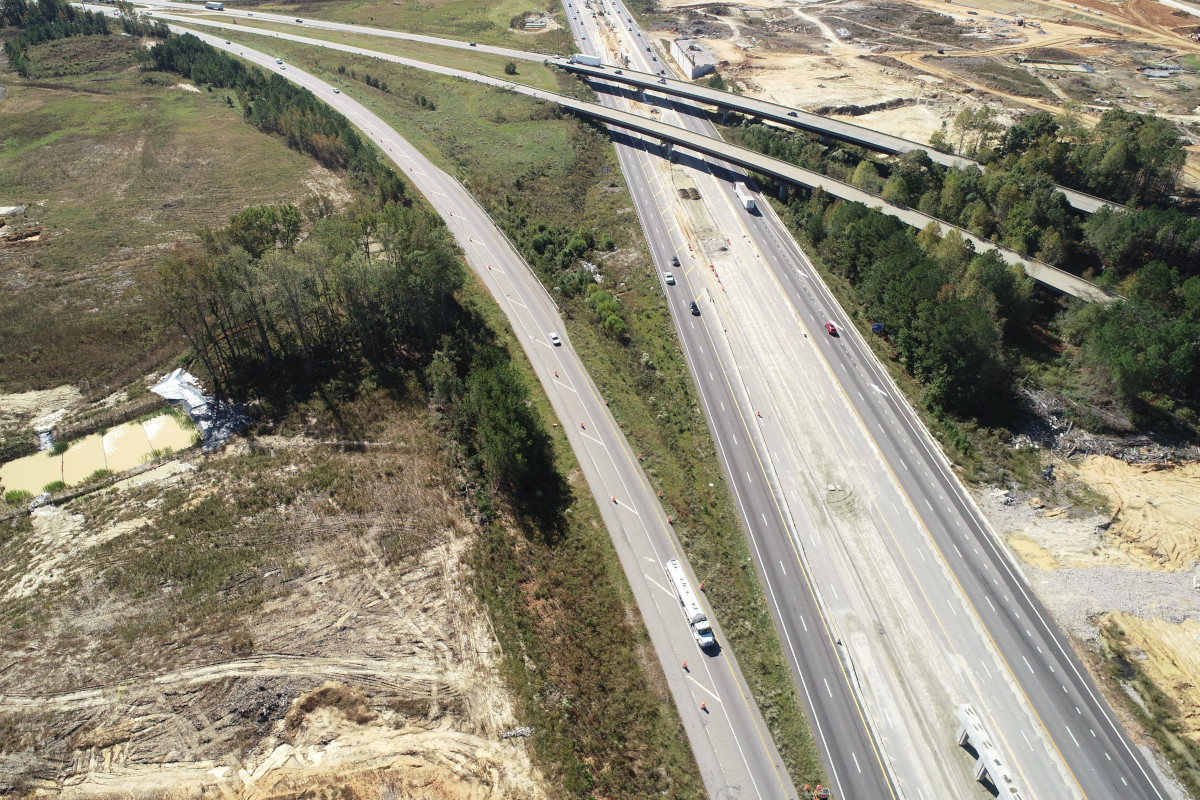 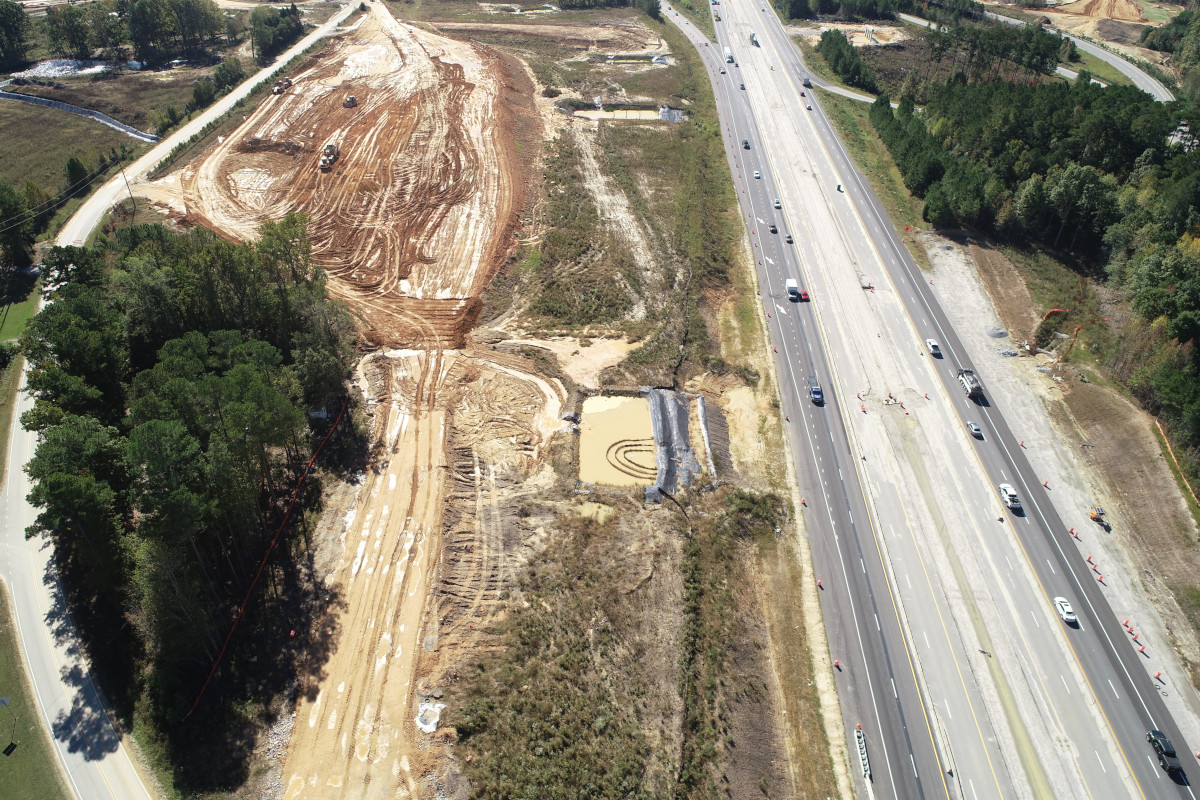 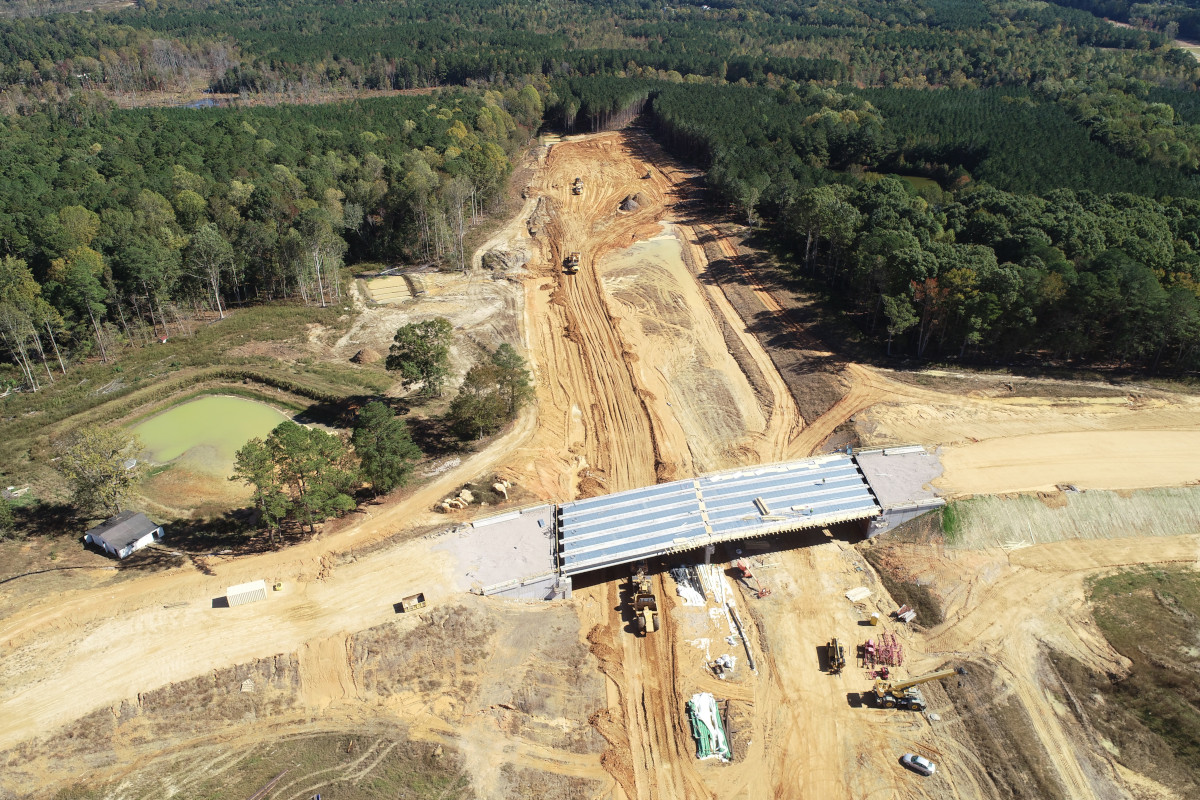 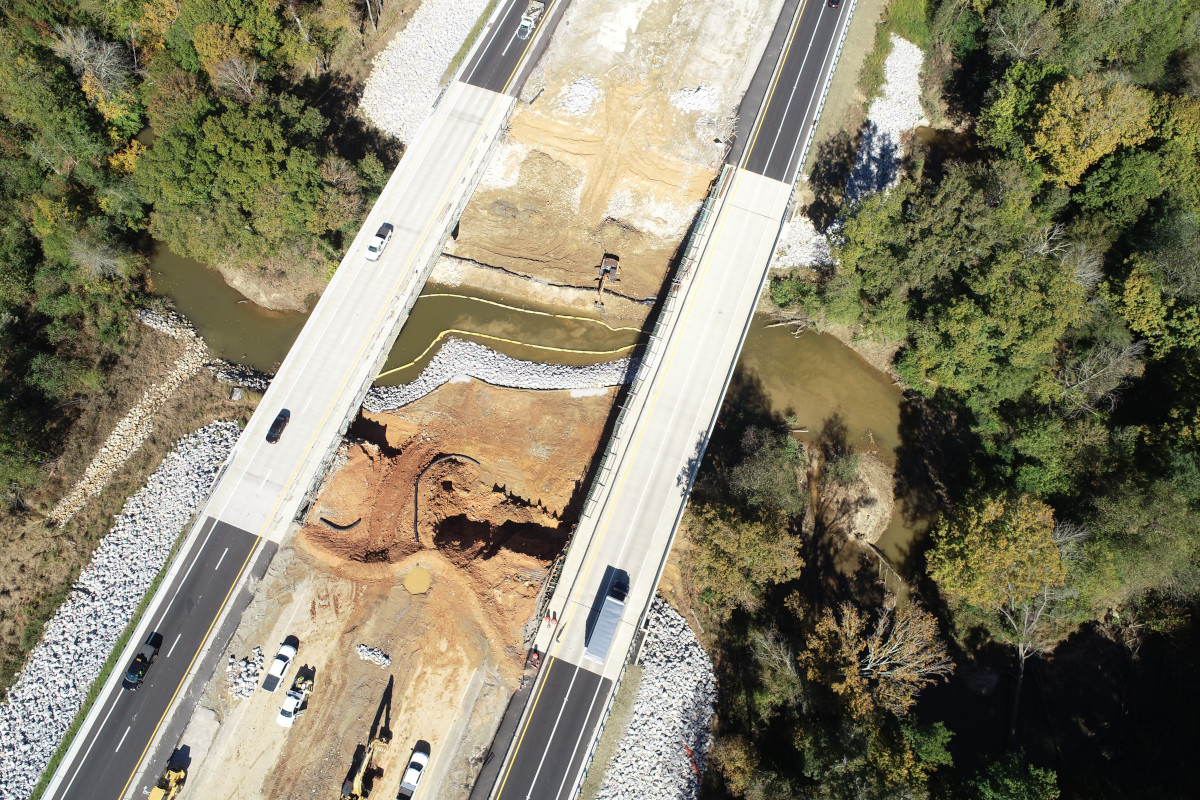