Josh Golomb is a Highway Designer and Project Manager in our Harrisburg, PA office who has been with RK&K for 15 years. We sat down to discuss his educational experience, career trajectory, and his thoughts on the future of the industry, including what it might mean to work as a civil engineer in a post-COVID-19 world.

Can you explain what you do to someone who is not familiar with the industry? 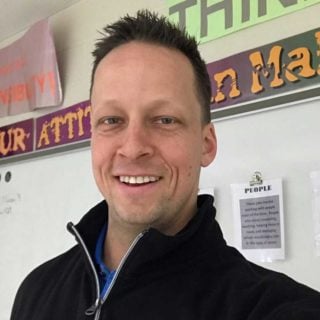 I’m a highway designer by trade. The simplest explanation is that whenever you’re driving on the road and you hit a construction site, I designed that. I always jokingly say you can blame me for that work.

Right now, I have a couple of projects that I manage from a design standpoint involving coordination with a lot of different people and disciplines. Anything associated with interchanges or local roads, sidewalks, curb ramps, ADA ramps – I do a lot of that work.

“By the end of the presentation, they all seemed to be excited and wanted to become civil engineers.”

I was at my son’s school last year and gave a presentation to a group of fourth graders. It was fun to explain to them what a civil engineer does. By the end of the presentation, they all seemed to be excited and wanted to become civil engineers. 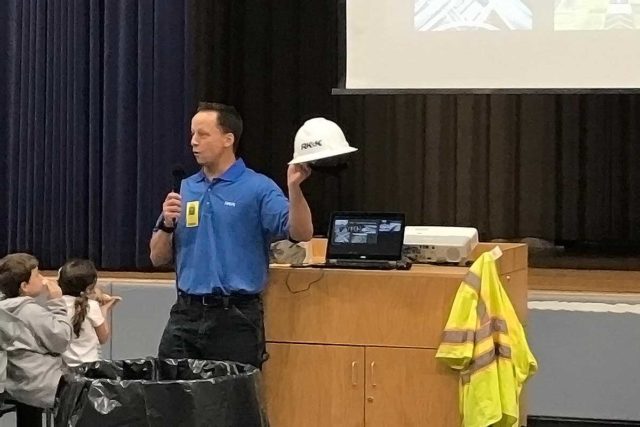 Can you discuss your educational background and maybe some steps on how to get into the industry?

I grew up in western Pennsylvania – that’s where I went to high school. I loved to fish, so I visited State College one time. There is a creek there called Fisherman’s Paradise, right outside of Bellefonte. I always believed I’d go to Penn State to fish, and in fact, that’s the only college I applied to.

I started at Penn State Altoona, where I spent two years before heading to the main campus with my fishing rod and waders. I graduated with my BS in Civil Engineering. I considered myself lucky because during my undergrad, one of my professors offered me a position as an undergraduate assistant, where I worked 20 hours a week. I was in this position for a year working with grad students to develop and test high-performance concrete. When it was time for me to graduate, the professor offered me an assistantship to attend grad school and continue that research. I continued after the assistantship to attain by my MSCE in Material Science. My thesis was completed on freeze/thaw characteristics of high-performance concrete. The concrete that we developed was used by PennDOT on several bridges on the I-99 corridor near State College. Following that, I interviewed at RK&K and have been here since.

For a young college student trying to get into this industry, I would recommend looking at internships. I know things are a little crazy now, but I do see that coming back. Obtaining that experience as an undergrad was a huge benefit that afforded me real-world experience that was totally different from the college work.

For someone not yet in college, my suggestion is to really figure out what you enjoy. I started as an Electrical Engineering major. My friends told me how they were breaking concrete cylinders and doing tensile tests on steel, and I said, “That’s the kind of stuff I like. I like seeing stuff break.” I like hands-on, seeing sine waves in an oscilloscope. That was my thing growing up. I always liked watching houses and roads being built, as well as the smell of asphalt. So, I switched to Civil Engineering where I feel fortunate that my path opened the way it did, allowing me to be where I am now.

“For younger engineers in our industry, I would suggest getting involved with professional associations.”

For the younger engineers in our industry, I would suggest getting involved with professional associations. I am involved with several, including the American Society of Highway Engineers – Harrisburg chapter. I served on the Board of Directors for two three-year terms and met a lot of people, which was hugely beneficial. I find that it’s a little tougher in the world we live in now, but once we’re able to get back to normal, networking will be big. Getting to meet and know people opens many doors— and who knows where you can go.

My new typical day is very different than my old typical day. Before this whole crazy COVID-19 thing went down, I used to wake up early and head to the gym where I enjoyed swimming, bicycling, and running. After my workout, I’d return home and take my oldest son to school before heading into the office. At the office, I would start by tackling my to-do list and evaluating whether I needed to head out to a project site. After a day at work, I’d come home to my four boys that I’d shuffle to gymnastics, baseball or swim practice. I’d describe my typical day as very busy! 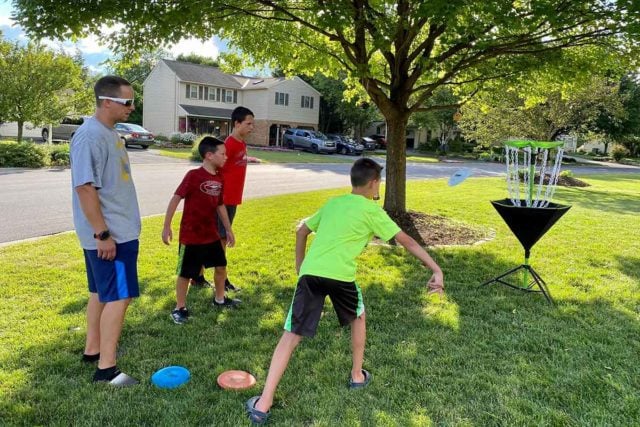 Josh and three of his four sons playing some disc golf.

However, my new typical day is a little bit different. Now, I get up in the morning, but not necessarily at 5 AM. The gyms in my area just reopened. There aren’t many people there during morning hours, so I wear a mask and knock out a workout, but I still go out and run and bike. I like to see the sunrise – that’s one of my favorite things. Once my morning workout routine is complete, I begin my “long commute” downstairs to the office where I begin by checking my schedule to see what’s on the agenda for the day. Meetings and calls are seemingly full throttle, and even more so now with Microsoft Teams and Skype. I’ve also attended a few field meetings. It’s been nice to go outside. Things are slowly getting back to some normalcy.

Adding to my day is my son’s baseball season which recently started back up. Although not baseball season as we knew it due to COVID-19, we’re all still having fun. It’s been really nice to get out of the house again.

How has your work changed during COVID-19?

The biggest difference, obviously, is working from home. I try to get back to the office now on Thursdays and Fridays allowing me to focus and roll through things right before the weekend, which is nice. That’s a new routine for me. Overall, work has changed quite a bit. I’m a consultant project manager for PennDOT District Five. I used to drive there two days a week in Allentown where I would have meetings all day, or I’d take care of work that I could only do at the District Office, but that office is still closed, so I am working from home and things are going well. 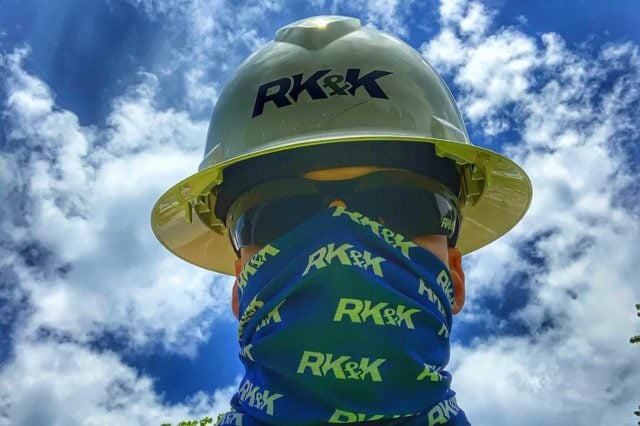 Josh in the field wearing his RK&K hardhat and face covering.

I would say things are a total 180. It’s changed significantly, but at the same time, it hasn’t changed that much because we’re still able to see each other face-to-face and communicate. I couldn’t imagine what it would be like if we weren’t able to have the technology and the resources that RK&K has provided. Although it’s now a different world, it’s been somewhat of an easy transition working from home to keep projects progressing.

On my design projects, we’re still in good shape and on schedule, but COVID-19 has made everything very fluid and constantly evolving.

What is your favorite project you have worked on and why?

Every so often you undertake a new project. I would say right now it’s not necessarily one project, but it’s my role as a consultant project manager at District 5 for PennDOT. In this position, I’ve learned a lot in the last seven years and it’s been great. I’ve met so many people in this role, ranging from different agencies, organizations, and consultants.

“I’ve met so many people in this role ranging from different agencies, organizations and consultants.”

When I attend industry functions, I enjoy seeing and talking to others. Before regularly attending, I felt as I didn’t really know anybody and was nervous to talk to people. I’ve enjoyed meeting and collaborating with so many people. These functions are not a project, per say, but attending will take you far.

What is your proudest achievement with RK&K?

I’m proud of a lot of things with RK&K, so it’s hard to identify one specific element. One thing that I’m most proud of is being able to know so many colleagues. I began my career in the Baltimore office before transferring to the York and now Harrisburg office. I’ve also worked with many people in our Virginia and Delaware offices. I know everybody from Pennsylvania, and I’ve met a lot of people from North Carolina through company functions. To know where to go and to be a resource for other co-workers if they have questions is a big achievement.

Another proud achievement is earning my PE license. That was a big step, and then of course, officially sealing a plan set. I was able to do that a few years ago for a set of roadway plans that went to construction and was completed. That was a big feather in my cap.

Do you have any comments on the future of the industry?

Before COVID-19, I was thinking very much about autonomous vehicles and how that was going to shape our industry’s future with respect to roads and what the needs might be. I know there’s always going to be commercial vehicles and there’s still a big increase, but now with COVID-19 and many folks teleworking, I’m interested to see how that affects our industry – especially pertaining to traffic volumes and funding.

“There are a lot of unknowns right now and only time will tell.”

I do see the future, but I have a slightly different perspective now. I mean, we’re still going to have trucks. Gas tax is a big question. How might this expedite that transition from a gas tax to maybe a vehicle miles traveled tax or some other type of tax? We’re using the roads, that’s where the money goes. There are a lot of unknowns right now and only time will tell.